You Deserve It Bhai: Pandya Steals Millions Of Hearts! Hands Over Man Of Series Trophy To Natarajan 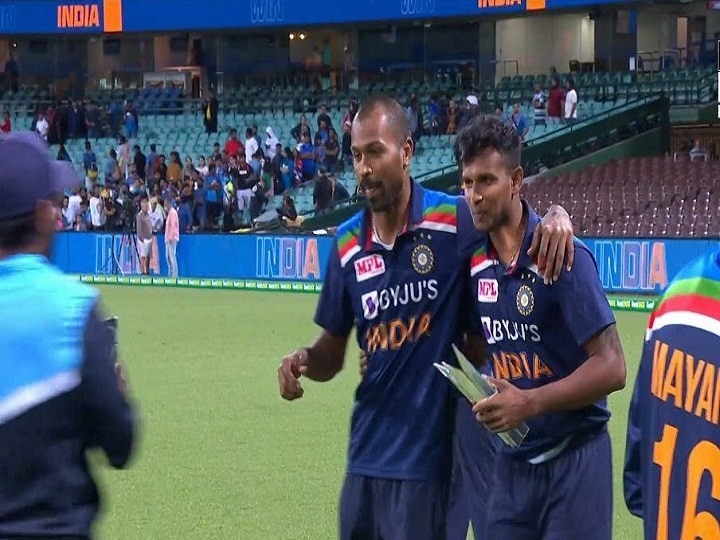 India’s seam all-rounder Hardik Pandya produced game changing knocks with his quick fire finishes down the order to win the Man of Series award in the 3-match T2OI series that concluded with a win for the hosts ‘Aussies’ in the third game at the SCG.

After being the show stopper with his pugnacious strokeplay and gun fielding in the T20I series against Australia, Pandya stole millions of hearts as he gave his Man of the Match award to medium pacer T Natarajan.

After India’s series clinching, Pandya said that Natarajan deserved to win the man of the series award as he had delivered with the ball while bowling in crucial stages and in batting friendly conditions on offer in Australia.

“Natarajan, you were outstanding this series. To perform brilliantly in difficult conditions on your India debut speaks volumes of your talent and hard work You deserve Man of the Series from my side bhai! Congratulations to #TeamIndia on the win,” Pandya tweeted after the match.

Natarajan, you were outstanding this series. To perform brilliantly in difficult conditions on your India debut speaks volumes of your talent and hardwork ???? You deserve Man of the Series from my side bhai! Congratulations to #TeamIndia on the win ???????????? pic.twitter.com/gguk4WIlQD

While Pandya deservingly won the Man of Series award for his breathtaking knocks in the first 2 T20Is, scoring 78 runs in the series; newcomer T Natarajan who made an impression of sorts in his maiden T20I series was spectacular with the ball picking up six wickets.

Pandya had earlier said after the second T20I that the man of the match award that he won should have been given to Natarajan.

“In the presentation ceremony I had said that I thought he would be Man of the Match but they say it has become a batsman’s game. But when the run rate was higher, he applied the brakes on Aussie innings. The 10-15 runs less he gave was the difference. The way Aussies started and where they ended — the first thing I said to everyone when we went to the dressing room was that they are 10-15 runs short and if we play normal cricket, we will win and in the end, the runs (Natarajan saved) mattered,” Pandya said after the match.