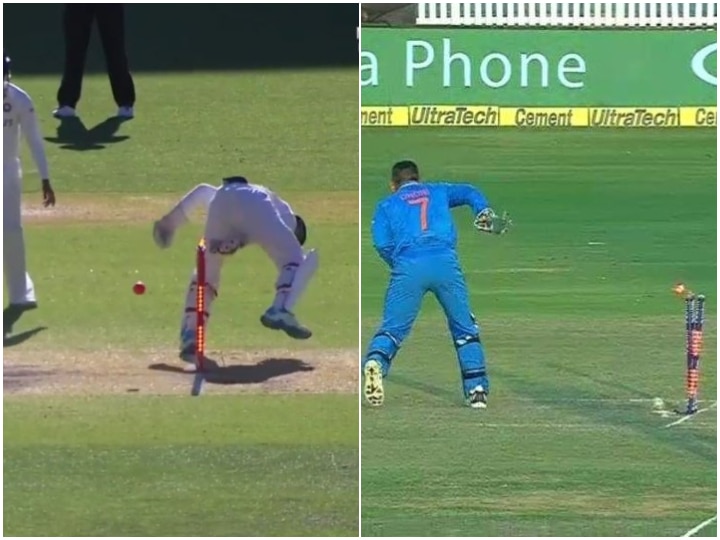 During the first Test match played between India and Australia at the Adelaide ground, it seemed like the Indian team would lose the match by 10 wickets but the visitors ultimately lost the match by 8 wickets in the day-night Pink-ball Test.

The reason behind this was that Indian team wicket-keeper Wriddhiman Saha pulled off a similar run-out behind the stumps like that of former India captain Mahendra Singh Dhoni. Saha’s sharpness and quick reflexes behind the stump helped him get rid of Aussie team opener Matthew Wade to give India their first breakthrough.

The mannerism in which Saha disturbed the woodwork to get rid of Wade, was very similar to the way MS Dhoni used to stump batsmen during his glorious international career.

The Australian team was given the target of 90 runs to chase in their second innings. Just when the hosts had scored 70 runs, Wriddhiman Saha cleverly dismissed Aussie team opener Matthew Wade.

Wade, on the ball off R Ashwin, danced down the crease towards the ball to strike it hard for a boundary, but the ball turned slightly and went away from him to the on side. By the time Wade came back to the crease, Wriddhiman Saha had done his work behind the stumps.

Cricket Australia’s official twitter handle, shared the video of Wade’s unusual dismissal with the caption: “Bizarre dismissal alert! What about that from Saha?! #AUSvIND”.

The technique that Wriddhiman Saha used in this match, similarly, MS Dhoni was also famous for such bizarre antics behind the stumps. Many times Dhoni has hit the ball from his feet to the stumps. He has even got success on several occasions. This is a very calculative risk along with the guess, as the wicketkeeper also has to keep in mind where the stumps are.

If the wicketkeeper tries to pull such stunt without calculating well and required concentration, then the ball is definitely going to miss the stumps, but it did not happen in the case of Wriddhiman Saha and he gave India a run out success.