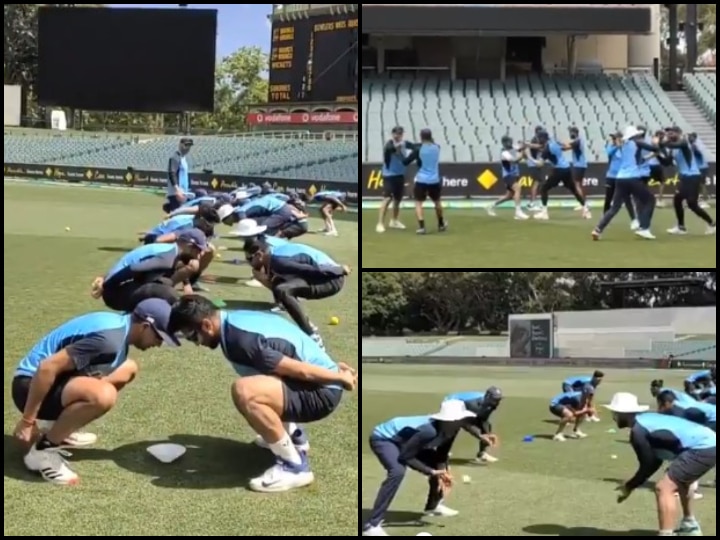 Captain Virat Kohli and his boys are set to lock horns with Australia at the Adelaide Oval in less than two days for a thrilling bout of pink-ball Test. With the stage being set for the mega game, the Indian team looked to indulge in some fun drills before hitting the nets on Tuesday. ALSO READ | India Vs Aus: ‘Kohli Was On The Verge Of Being Dropped But MS Dhoni Backed Him’, Reveals Sanjay Manjrekar

The Board of Control for Cricket in India (BCCI) today shared a video in which players were seen having fun drills. A series of unique training methods were added to lift the team spirit and ease the pressure going into India’s first pink-ball Test against the hosts.

“Fun drill anyone? Sample that to get your batteries charged before a solid net session,” BCCI tweeted.

As per a report by news agency ANI, the first part of the activity involved pushing each other in pairs in a mode somewhat similar to wrestling while the second activity saw players working on their catching skills. The third one was about agility as two players fought it out to be the first to pick a cone that was placed on the ground.

It is pertinent to mention that this will be India’s first overseas pink-ball Test. Cricket buffs are excited to see Kohli and his men in what promises to be a cracker of a contest on the biggest stage.

Moreover, this will be the first Test Game of the series and probably the only one in which skipper Kohli will be playing a part as he has been granted paternity leave. Kohli would be travelling back home to be beside his wife and Bollywood actor Anushka Sharma for the birth of their first child.

For the first time in NFL history, a woman will officiate at the Super Bowl

For the first time in NFL history, a woman will officiate at the Super Bowl

FedEx says it’s cutting up to 6,300 jobs in Europe