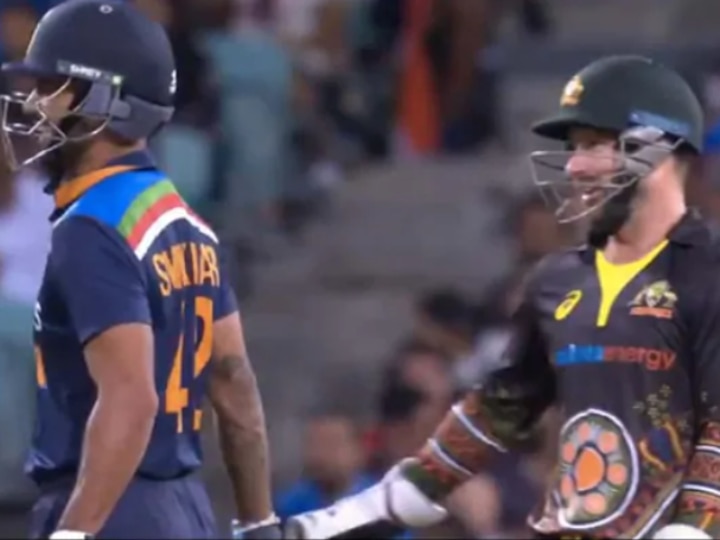 India defeated Australia by 6 wickets in the second T20 match and captured the series 2–0. With this, the Indian team has also completed the revenge of their humiliating defeat in the ODI series. India needed 14 runs to win in the last over, which was achieved by Hardik Pandya (22-ball 42) with 2 gigantic sixes.

MS Dhoni has said goodbye to international cricket but his extraordinary wicket-keeping skills are still remembered. During the second T20 match between India and Australia, when hosts’s stand-in skipper and wicket-keeper Matthew Wade missed out on stumping Shikhar Dhawan by a slight margin, he was heard telling Dhawan “Not Dhoni, not quick enough like Dhoni!” His conversation with Dhawan was heard by everyone from the stump mic.

On the last ball of the 9th over of the Indian innings, Wade appealed to the umpire after taking off the bails when Dhawan was batting. Dhawan wanted to cut Mitchell Sweepson’s delivery but he missed it and the ball went straight to Wade’s gloves.

When the third umpire reviewed it, it was revealed that Dhawan’s foot had come back to the crease in time. Even if there was a delay of one second, he would be out. In this way, the Indian opener survived narrowly.

After this, Dhawan nodded and gave his consent to Wade’s dialogue and also shared a good laugh. Also, the commentators could not stop themselves from laughing after listening to the conversation.

Dhawan (52 runs), today, scored a brilliant half-century. During his innings, he hit four fours and two sixes. Together with KL Rahul, he also gave India a strong start. The duo added 50 runs for the first wicket in first five overs.