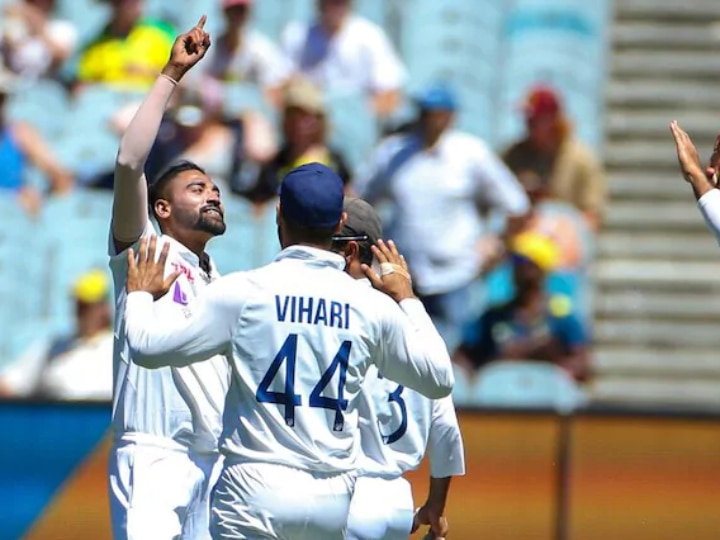 India’s sensational young speedster Mohammed Siraj made his Test debut in Melbourne during Ind vs Aus 2nd Test on Saturday. In his first ever Test game for his national team, Siraj bowled remarkably well and picked the wickets of Marnus Labuschagne and Cameron Green. The young paceman bowled four maidens in his spell of 15 overs and took two wickets for 40 runs. After the match, Siraj spoke to Team India’s fielding coach R Sridhar about the match. What made this conversation very interesting was that both spoke in Hyderabadi style.

ALSO READ | Ind vs Aus: ‘I Will Be Accused Of…’ – Sunil Gavaskar Tells Why He Wants To Cautiously Praise Ajinkya Rahane

In the video posted by BCCI on twitter, Siraj can be seen talking about the atmosphere around his debut and his bowling plan. After this, coach Sridhar praised Siraj in Hyderabadi style and said, “Maza aagya aapko ground me dekh kr, ekdam maut daal diye miya.”

You do not want to miss this fun chat between @coach_rsridhar & #TeamIndia‘s newest Test debutant, Siraj from the MCG – by @Moulinparikh

Sridhar started the conversation with Siraj by saying that he is the first Hyderabadi player after VVS Laxman who was born in Hyderabad and played Test for India.

When asked about the atmosphere during the time of his debut, Siraj said that it was very good and revealed when he came out on the field and received his Test cap, it was the biggest achievement of life. Siraj was handed the test cap by veteran off-spinner R Ashwin.

On the first day of the Melbourne Test, Siraj troubled the Australian batsmen with his speed and swing. Captain Ajinkya Rahane used Siraj quite accurately. Siraj, who was playing a debut match, had not bowled before lunch because he gained swing from the old ball. When Rahane handed him the ball after lunch, Siraj removed in-form Labuschagne. Later, he also dismissed Cameron Green.