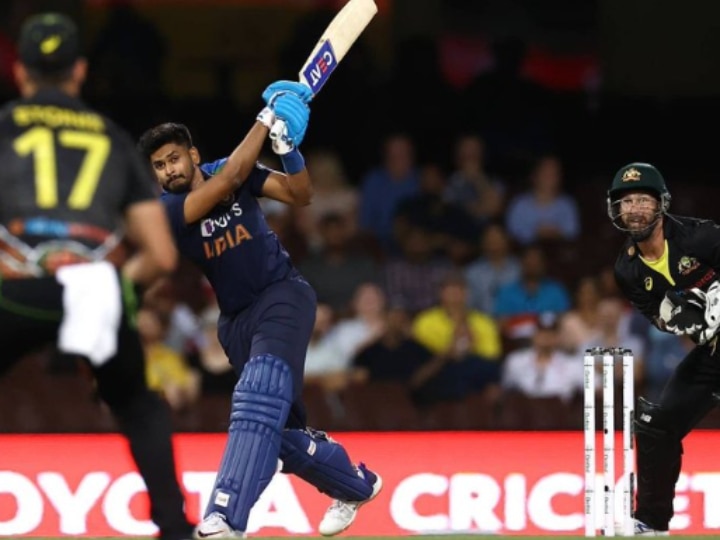 Indian cricket team defeated Australia by six wickets in the second T20 of the three-match series played at the Sydney Cricket Ground (SCG) on Sunday. With this, India has taken an unassailable 2-0 lead in the T20 series, successfully taking revenge for the One-Day-International series. The true heroes of this match were Hardik Pandya and Shikhar Dhawan, but Shreyas Iyer also didn’t fail to impress everyone with his hard-hitting skills.

During the match, Birthday Boy Shreyas Iyer hammered such a gigantic six that even Indian captain Virat Kohli got super excited and thrilled. In 17.4 overs during India’s innings, Shreyas Iyer hit a 111-meter six off Adam Zampa’s delivery. Virat Kohli and KL Rahul were quite shocked to see Iyer’s huge six. Also, one member of the support staff of the Indian cricket team also stood up from his seat and looked extremely mesmerized.

Virat Kohli’s mouth remained wide open and the entire stadium echoed with applause. Shreyas Iyer, who flopped during the entire ODI series against Australia, scored 12 runs off 5 balls with 1 fours and 1 six in today’s game.

ICYMI: #SkipperShreyas‘ no-look SIX on his birthday, that made our day, week and month 💙💥#AUSvINDpic.twitter.com/7E6Kkyk8QA

Earlier, Shreyas Iyer flopped badly in ODI series. The Delhi Capitals skipper scored 2, 38 and 19 runs respectively in three ODIs against Australia. During this time, he could not hit a single six. Seeing his form, the team management decided to include Manish Pandey in the playing XI by dropping Iyer for the first T20 match.

However, due to Manish Pandey’s injury in the second T20, Iyer was once again included in the playing XI but he completely missed the opportunity. After Virat Kohli’s dismissal, Iyer came to the crease and supported Hardik Pandya till the end of the run chase.