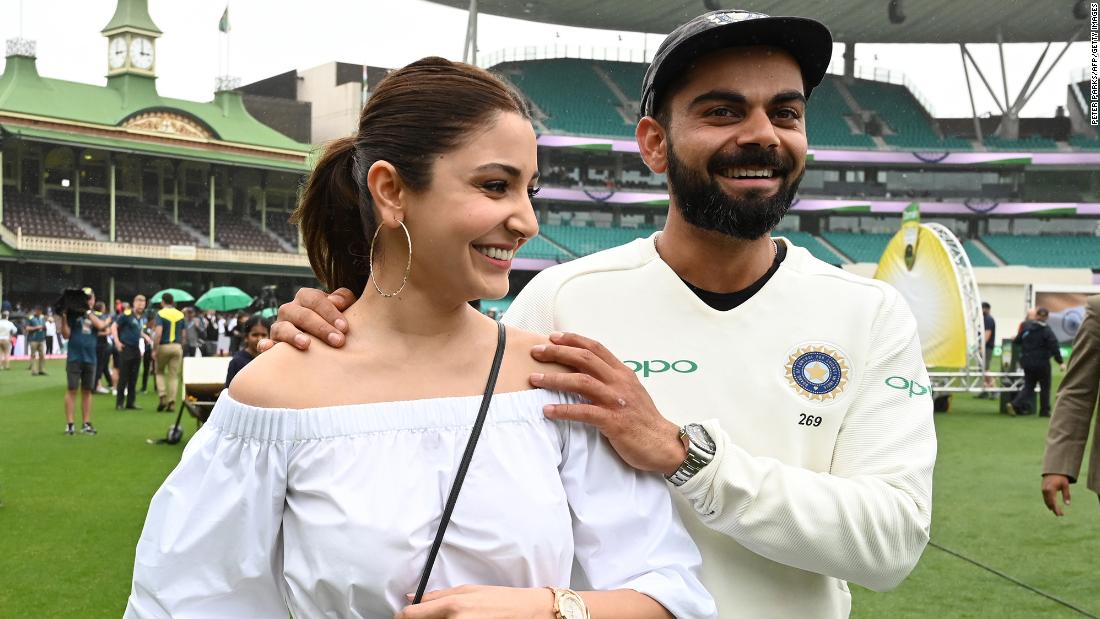 Dhoni had skipped the birth of his daughter to compete in the World Cup in Australia, saying: “I am on national duties, so I think everything else can wait.”

Five years later, the same dilemma faces another Indian cricket captain. Only this time Virat Kohli has put his family before his profession.

“It is a very, very special and a very, very beautiful moment in our lives and something that I truly want to experience,” the Indian captain said. Kohli said his decision was influenced by the fact he would have to quarantine in both countries — meaning if his child was born while he was abroad, he wouldn’t immediately be able to fly home and be with his family.

In cricket-mad India, players are revered almost as demigods, often facing unforgiving expectations. After big losses, their homes have been attacked, effigies of them burned, and their families threatened.

Harsha Bhogle, a well-known cricket commentator, for example, tweeted that the captain’s absence would make the tournament tougher for team India, but hailed Kohli’s decision. “There is more to life than just his profession,” he said.

“It encourages others who otherwise might have thought twice or might be constrained by the social environment in which they live, to break free,” he says.

Where India stands on parental leave

In 2017, India’s Maternity Amendment Bill increased the right to paid maternity leave from 12 to 26 weeks — more generous than the leave new mothers are granted in the US or France, for example.

But, while central government employees are entitled to 15 days of paternity leave, there is no national law mandating leave for new fathers.

Minu Dwivedi, a partner at J. Sagar Associates, a leading national law firm in India, says some companies are taking it upon themselves to offer paid paternity leave to keep in line with global best practices. Last year, for example, Indian restaurant aggregator and food delivery start-up Zomato announced 26 weeks of paid leave to all new parents — including fathers.
“I believe that young parents should be able to make a choice of how to care for their children,” said its founder, Deepender Goyal, in a blog. “That a myopic view of primary care-giving not only alienates one half of our workforce, but also creates circumstances that lead to fewer female leaders within organizations, the community and the nation.”

Simantini Ghosh, assistant professor of psychology at India’s Ashoka University, says that to advance gender equality, it is critical for men to participate in domestic work and parenting. She says paternity leave not only benefits couples, but children, too. “The child grows up in a more egalitarian and equal family… they have a higher likelihood of developing to adults with a much fairer understanding of gender justice and equality in relationships,” she says.

In 2017, Indian politician Rajeev Satav proposed a Paternity Benefit Bill for those working in the private and the unorganized sector, which would grant new fathers paternity leave of 15 days, extendable up to three months.

“An absence of paternity leave implies that childcare is the responsibility of only the mother. A paternity leave policy can help in incremental attitudinal changes and to remove gender role distinctions,” Satav wrote in the proposed Bill.

The Bill did not move forward in Parliament, although a senior official in the Labor Ministry said extending paternity leave to other sectors could not be ruled out in the near future.

Why India needs a paternity law

In India, the patriarchy remains deeply entrenched. Traditional communities still see women as home makers and men as bread winners, and many view child rearing as a woman’s job and a threat to their masculinity. The Observer Research Foundation, an independent think tank based in India, found last year that the country’s female labor force participation rate stands at 27%, compared to 96% for men.

Sociologist Shiv Visvanathan says Kohli is trying to shift that message. “A change in the way we consider family is necessary. Modern men need exemplars and Kohli’s decision will make people see in this the grand possibility of social revolution,” says Shiv.

Karn Bawari, who works for a leading corporate in Mumbai, will take the 14 days of paternity allowance his firm offers when his wife has their second baby in March. But the 34-year-old would like to take longer. “Modern parenting demands a longer paternity leave. It’s not the mother’s job alone to raise a child,” he says.

“Kohli’s decision to take paternity leave should serve as an eye-opener to many.”

But not everyone feels that way.

Prayag Mohanty, 36, lives in India’s IT hub of Bengaluru with his wife of more than two years.

At the venture capital fund, where he is a senior vice-president, new fathers can take 7 to 14 days of paternity leave.

While the couple is yet to decide on whether to have a baby, Mohanty says when the time comes, he won’t need more than the stipulated paternal leave mandated by the company. “My parents live in the same city and can help with care-giving,” he says.

He believes Kohli should have followed his ex-captain’s footsteps. “Dhoni didn’t see his newborn for over two months since he was on national duty”, says Mohanty.

The right man for the message

If there was anyone who could speak to the Indian masses persuasively, perhaps it is Kohli: a beloved cricketer, adored by young Indians in particular, who long ago proved his dedication to the nation.

In 2007, Kohli’s father died while the cricketer was playing for Delhi in the Ranji Trophy — India’s most prestigious competition, played between teams representing regional and state cricket associations.

Despite the huge personal loss, Kohli decided to resume his game at the stadium the next morning. Kohli left the stadium for the crematorium to attend the last rites of his father, the man who had always supported his dream to be a cricketer.

Ghosh says a very subtle but important message has been conveyed by Kohli, who generally has a “tough guy” image.

Simply put, she says: “Trying to be an involved and hands-on father does not emasculate a man.”