US Soccer reaches deal with women’s national team in fight for equal working conditions, but not equal pay

but not equal pay - CNN, us, US Soccer reaches deal with women's national team in fight for equal working conditions 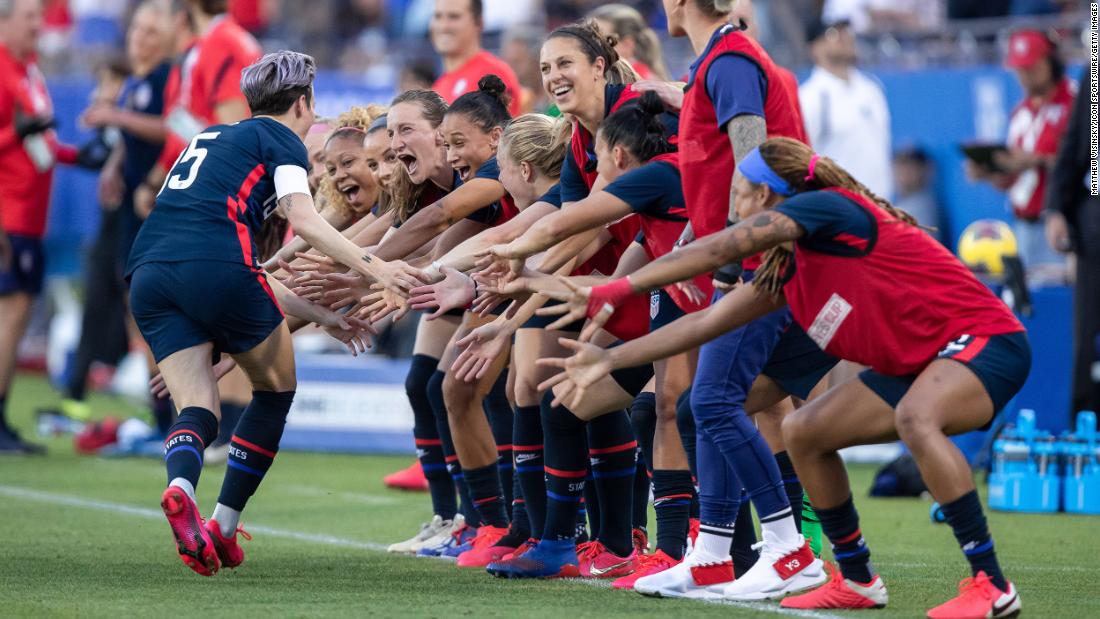 The two sides have reached a deal resolving the unequal working conditions claim that the USWNT put forth as part of a larger lawsuit from March 2019, which claims the women were paid less than the men’s team and were also subjected to unequal conditions.

The latter claim, US Soccer announced Tuesday, has been resolved, with both parties having filed a proposed settlement. In it, the federation pledges to implement policies specifically related to “hotel accommodations, staffing, venues, and travel.”

In a statement, Molly Levinson, a spokeswoman for the USWNT players, emphasized the deal does not indicate the end of the legal battle, saying the team still plans to appeal the court’s decision this past May dismissing the team’s equal pay claims.

The deal, Levinson said, doesn’t “account for the central fact in this case that women players have been paid at lesser rates than men who do the same job.”

“We remain as committed as ever to our work to achieve the equal pay that we legally deserve,” she said. “Our focus is on the future and ensuring we leave the game a better place for the next generation of women who will play for this team and this country.”

Cindy Parlow Cone, US Soccer president and a former USWNT player, called Tuesday’s deal a “positive step forward,” and she urged the team to accept the standing offer to discuss contract options.

“As a former USWNT player, I can promise you that I am committed to equality between the USWNT and USMNT,” she said in a statement, referring to the men’s national team. “My goal is, and has always been, to come to a resolution on all equal pay matters and inspire a new era of collaboration, partnership and trust between the USWNT and the Federation.”

US Soccer president: Equal pay demands would ‘bankrupt’ the organization

In a conference call following the announcement, Cone told reporters that the federation has reached out to the team and offered them the same contract as the men for games controlled by US Soccer. However, Cone said, the team is requesting the federation make up the FIFA World Cup prize money, a “vast majority of the $66 million they’re requesting in back pay.”

Making up that money, Cone said, would likely bankrupt US Soccer.

“This would be devastating to our budget and to our programming,” she said. “But given Covid, not to be overly dramatic, but it would likely bankrupt the federation.”

In May, USWNT star Megan Rapinoe, appearing on ABC’s “Good Morning America” after the court dismissed the team’s equal pay claims, said US Soccer never offered the men’s contract to the women.

The USWNT originally filed a lawsuit against the US Soccer Federation in March 2019, with 28 members of the team listed as plaintiffs.

The suit alleges the US Soccer Federation’s payment practices amount to federal discrimination by paying women less than men “for substantially equal work and by denying them at least equal playing, training, and travel conditions; equal promotion of their games; equal support and development for their games; and other terms and conditions of employment equal to the MNT.”

In May, Judge R. Gary Klausner wrote in his decision that the members of the USWNT did not prove wage discrimination under the Equal Pay Act because they played more games and made more money than the men’s team. The women’s team also rejected a collective bargaining agreement (CBA) where they would have the same pay structure as the men’s team in favor of a different CBA, Klausner wrote.

“This approach — merely comparing what each team would have made under the other team’s CBA — is untenable in this case because it ignores the reality that the MNT and WNT bargained for different agreements which reflect different preferences, and that the WNT explicitly rejected the terms they now seek to retroactively impose on themselves,” Klausner wrote.

Rapinoe defended the USWNT, arguing, “the men’s contract was never offered to us and certainly not the same amount of money.”

“To say that we negotiated for our contract and that’s what we agreed to, I think so many women can understand what this feeling is of going into a negotiation knowing equal pay is not on the table. Knowing anywhere close to your male counterparts is not even on the table,” she said.