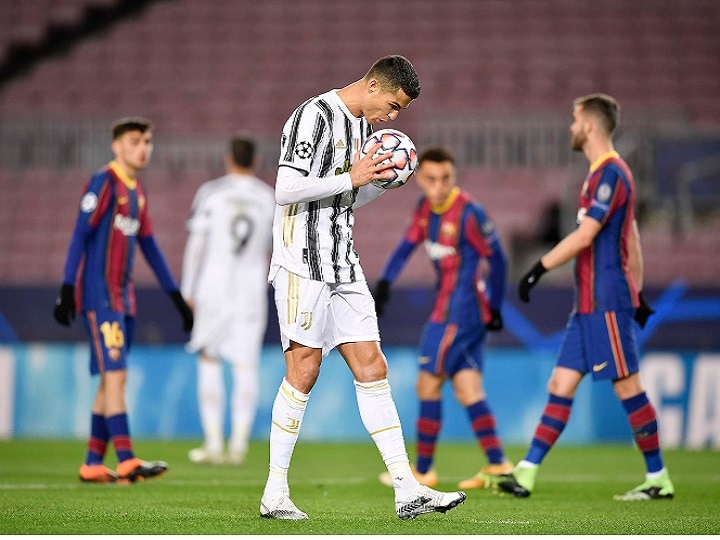 Juventus’ 3-0 drubbing of Barcelona moved them to pole position in Group G and dethrone the Catalan Giants (superior goal difference) in the showpiece club competition in Europe.

Playing against Messi for the first time since joining Italian giants Juventus, Ronaldo scored a brace in his team’s dominant win over the Spanish powerhouse as he found the back of the net twice, opening the scoring in the 13th minute and adding the third goal via a penalty kick in the 52nd minute.

In the latest chapter of the much famed Ronaldo-Messi rivalry, ‘CR7’ hogged the limelight as he displayed his all-round skills as a footballer, not only spearheading attack but also making defensive tackles to subvert Barca’s counter attacks.

With double strikes against Barcelona, Ronaldo extended his record-goal tally to a whopping 134 goals in Champions League. He is just four goals short of all-time leader Messi’s tally of 138 goals in the marquee club competition.

Barcelona made desperate attempts to stage a comeback into the match with Messi hitting two shots straight to Juventus keeper Gianluigi Buffon. Seven of Messi’s 11 shots were on target but he couldn’t find a way past the Juventus keeper.

The loss to Juventus did not hurt Barcelona much as the Spanish team have secured a place in the knockout stages of the UEFA Champions League, finishing the group stages tied with Juventus on 15 points each.