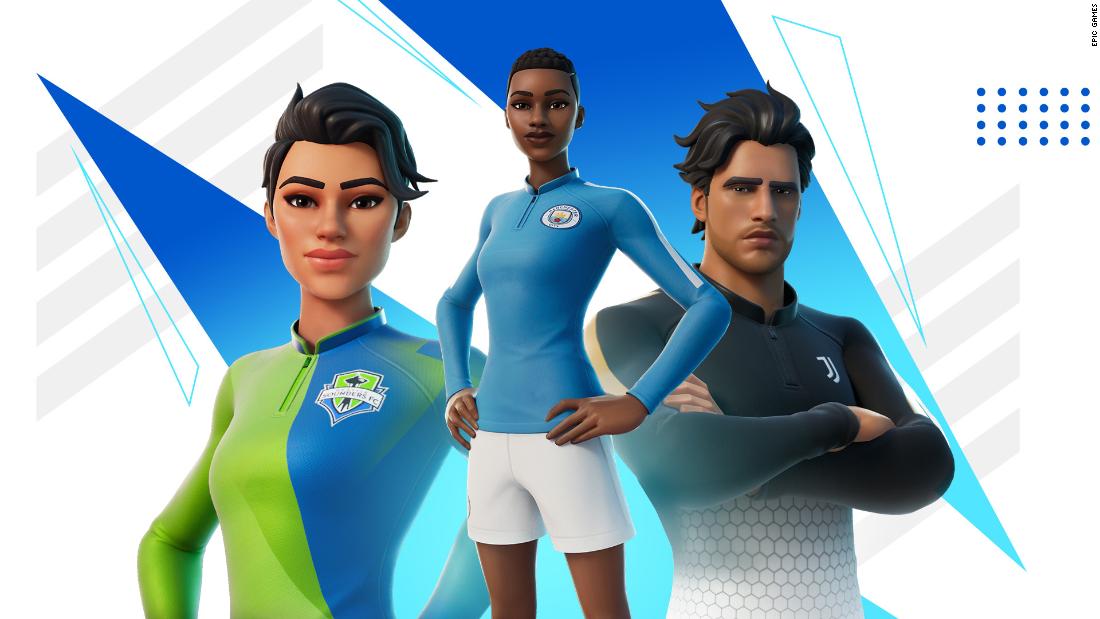 As global fanbases shelter from the pandemic at home, a collaboration between Epic Games – the creator of the video game Fortnite – and the world of football has opened another sphere of competition online.
“Fortnite has been around for over three years now,” Nate Nanzer, Head of Global Partnerships at Epic Games, told CNN Sport.

“We’ve spent a lot of time listening to our players and having conversations with them about what do they want to see next.

“Overwhelmingly, the sport that we hear from our players that is most wanted to come to the game is global football, soccer.”

Their wish has now been granted as 23 clubs across five continents, including Manchester City, Juventus and AC Milan, are entering into partnership with Fortnite to bring the first-ever official football kit inspired skins to the game.
“It’s a truly global launch,” added Nanzer. “We have clubs from the Premier League, from Serie A, from MLS, the J League in Japan, the league in Australia, all over the world.

“This is just the beginning of what we want to do in football. We’re so excited to get this into the game and can’t wait to see where it goes over time.”

In addition to new skins for the players of the popular video game to use, football clubs are also set to host their own special Fortnite tournaments with real custom jerseys and other rewards up for grabs.

Another huge figure from the football universe to be involved is Brazil legend Pele. His long-time club Santos FC will feature in the game alongside his iconic celebration and a unique Pele Cup tournament.

“Who better to kick off a global football program than one of the greatest players to ever live?” said Nanzer.

“We’re super excited to be able to bring Pele’s famous air punch celebration into the game.

“We also have a really exciting tournament that we’re going to be running where any Fortnite player will be able to sign up and compete to try to win both outfits and the Pele emote early, prior to launch, for free.”

The desire for world-famous football institutions to collaborate with an online video game, where football is not played, lies in its youthful audience and the unique marketing opportunity it provides.

It coincides with the strategy that AC Milan’s new owners brought in, repositioning the brand to become more interesting and appealing to fans.

“We pride ourselves on being innovative and forward-thinking,” Casper Stylsvig, Chief Revenue Officer for AC Milan, told CNN Sport.

“We think there is a clear overlap between sport entertainment, esports and gaming.

“That’s the reason we need to be in this field as well, we need to be relevant for our fans and potential fans and especially also attract the younger audience.

As a game with 350 million registered users last year, Fortnite represents huge outreach potential for sports clubs and only underlines the possibilities of burgeoning digital markets in a time when people are spending an increased amount of time online.

“It’s very clear that this is the way forward where we are moving,” added Stylsvig.

“The digital space is incredibly dynamic, and we need to be equally dynamic in terms of how we engage with our global fan base of almost 450 million, which is everywhere around the world.

“Using the digital space is a unique opportunity for the brand to reach out to fans who cannot normally attend a match in the stadium, but also in these specific times.”

Fortnite has previously partnered with the NFL, Marvel and Warner Bros, utilizing a promotional design that is mutually beneficial to both sides.

“Everything we do at Fortnite is very high touch, very collaborative,” Nanzer explains.

“There’s no advertising in Fortnite, there’s nobody who’s ever paid us money to be in the game or anything like that.

“It’s all about doing things that are authentic to our partners’ brand and to Fortnite. Really, it’s about creating a collaboration that’s going to add a ton of value for both our players and for our partners’ fans.”

In doing just that, there is hope that fanbases of both the traditional sport and the video game can broaden, and continue to rival one another in a new arena.