Saina Nehwal and HS Prannoy have been tested positive in the third Covid-19 test in quarantine ahead of the Thailand Open 2021. Both the shuttlers, who were participating in the Thailand Open 2021, have been taken to the hospital for further tests in Bangkok, as per ANI. Saina’s husband and fellow Indian shuttler Parupalli Kashyap has also been taken to the hospital but his report status has not been confirmed.

Badminton players from India have reached Bangkok to play ahead of the Olympics as the game has resumed once again after gap of almost 300 days. Ace Indian shuttler was to play against Malaysia’s Kisona Selvaduray on Tuesday in first round of the tournament. However, being detected positive of coronavirus, Sania led to a walkover to Malaysia’s Kisona Selvaduray, who has now moved to the second round of women’s singles.

Earlier at the time of her arrival in Thailand, Saina had complained about physios and trainers not being allowed to meet the players during the entire tour.  In a series of Tweet on January 5, the shuttler took to microblogging site to raised objections on the one hour practice time for the entire team. The 30-year old shuttler also spoke regarding the fitness of the athletes after physios and trainers were restricted from meeting the badminton players during the entirety of their Thailand tour. 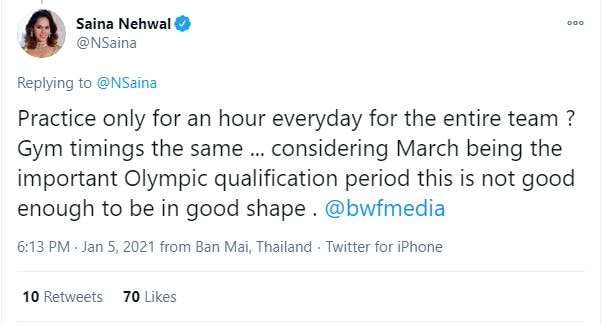 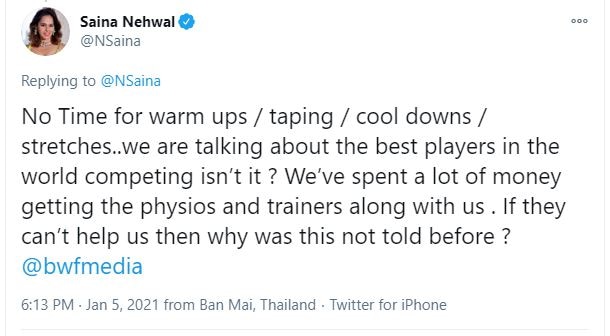 While undergoing coronavirus tests, Saina had requested Badminton World Federation (BWF), to settle the mess as it was impacting the performance of the players on the court.