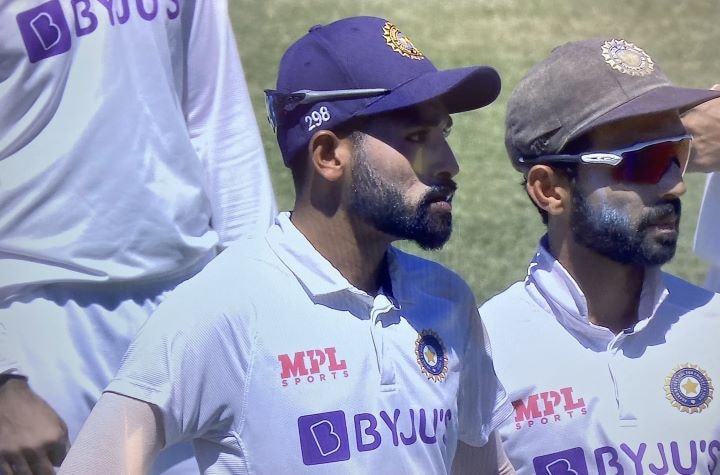 After facing racial abuse by Australian fans on Day 3 of India vs Australia 3td test being played at the SCG and the Indian team lodging an official complaint about the same, the visitors camp faced a similar situation on Day 4.

Mohammed Siraj, who was at the ropes was seen walking in and towards his captain. He was seen talking with umpire Paul Reiffel.

Apparently, there were some words said to Siraj who went back to the field near the boundary rope. Captain Ajinkya Rahane took the issue to on-field umpires straight away and the security at the ground also got in action and evicted the 6 men out of the stadium

Siraj was fuming with anger and was consoled by Rahane and Rohit Sharma. The Hyderabad-born was also seen pointing towards the stands from where the fans had misbehaved. Australia captain Tim Paine, who was at the crease at that moment, talked to Rahane over the issue. The play was halted for over 10 minutes.

This time around, the fans were not left with simple warnings, but instead thrown out of the ground. The crowd at SCG had a mix reaction to the incident.

Former Indian batsman Virender Sehwag took to Twitter to talk about the issue. He wrote, “Tum karo toh Sarcasm, aur koi Kare toh Racism. Very unfortunate with what some of the Australian crowd has been doing at the SCG and spoiling the vibes of a good test series”.

Very unfortunate with what some of the Australian crowd has been doing at the SCG and spoiling the vibes of a good test series. pic.twitter.com/mrDTbX4t7i

Cricket Australia has condemned racial abuse faced by Mohammad Siraj and other Indian cricketers and said that it believes in zero-tolerance policy towards discriminatory behaviour in all forms.

Cricket Australia has reaffirmed its zero-tolerance policy towards discriminatory behaviour in all forms following the alleged racial abuse of members of the Indian cricket squad by a section of the crowd at the Sydney Cricket Ground on Saturday: Cricket Australia pic.twitter.com/FCyXtNQR0y

Former Australian cricketers Michael Hussey and Shane Warne have condemned the racial abuse at the Sydney Cricket Ground (SCG) during the Test match between India and Australia.

The Indian team on Saturday lodged an official complaint after the crowd at the SCG racially abused pacers Jasprit Bumrah and Mohammed Siraj over the second and third day of the ongoing Pink Test between India and Australia.

“It’s terrible behaviour and I can’t believe it’s still happening in this day and age. They should be banned for life from coming to cricket. The Indians have come here to our shores to entertain us, play some great cricket, we should be so grateful that we can watch some live sport. To treat the players like that is unacceptable,” Hussey told Fox Cricket.

Earlier, Indian pacers Jasprit Bumrah and Mohammed Siraj over the second and third day of the ongoing Pink Test between India and Australia were racially abused.

On Saturday, speaking to ANI, a BCCI official in the know of developments said that the Indian cricket board stands with the boys as such behaviour is “unacceptable”.

“The tour has surely turned sour and the last thing you expect in a civilized society is racial abuse. The ICC (International Cricket Council) and Cricket Australia need to be very responsive to this as the possible alternatives are not very pleasant for cricket, especially during the present circumstances. The Sydney Test has now become an acid test for CA interim CEO Nick Hockley and we are in complete solidarity with our boys. Racial abuse is unacceptable,” the official explained.