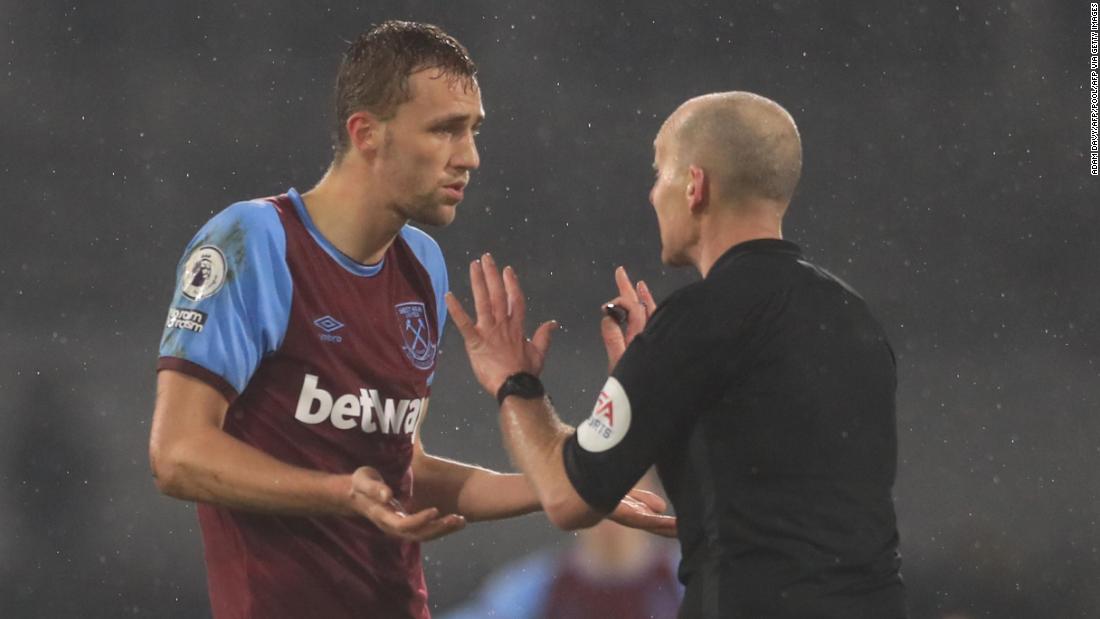 Mike Dean had received criticism for sending off West Ham’s Tomas Soucek on Saturday and Southampton’s Jan Bednarek on February 2, despite reviewing both incidents on the pitch-side monitor.

Both red cards were subsequently overturned on appeal by the respective clubs.

“It is inexcusable that Mike Dean and his family have received online abuse, including death threats, as a result of doing his job officiating at a Premier League match,” said Premier League chief executive Richard Masters in a statement sent to CNN.

“It is completely unacceptable that we are seeing abusive behaviour aimed at players, managers and match officials regularly on social media platforms.

“Mike and his family have our full support in reporting this to the police. This once again highlights the need for greater proactive intervention from social media companies to stop online abuse and identify offenders.”

The 53-year-old Dean, arguably the Premier League’s most high-profile referee, has reportedly notified the police of the abusive messages. Merseyside Police did not immediately respond to CNN’s request for comment.
It’s also been widely reported that while Dean will referee Leicester City’s FA Cup fifth-round tie against Brighton on Wednesday, he asked not be involved in any of Premier League’s fixtures this weekend.
READ: Chelsea left ‘disgusted’ by online racism directed at Reece James and calls for more action

Mike Riley, the head of refereeing in England, said the abuse directed at Dean is “totally unacceptable.”

“We fully support Mike’s decision to report these messages his family received to the police,” he said. “Nobody should be victim of abhorrent messages like this. Online abuse is unacceptable in any walk of life and more needs to be done to tackle the problem.”

West Ham midfielder Soucek also tweeted his support for Dean and his family.

“Whatever decisions are made on the pitch should stay on the pitch,” he wrote. “I don’t like hearing about it interfering with personal life and I send Mike Dean and his family my support. There is no place for abuse of any kind. It is in the past and I’m now focused on the rest of the season.”

During the 2020/2021 season, a number of Premier League players have received abuse — in particular racist abuse — on their social media accounts.
Last week Oliver Dowden, who is Britain’s Secretary of State for Digital, Culture, Media and Sport, told Parliament that the government’s “online safety Bill, we will require social media companies to take swift and effective action against criminal abuse online, and as part of that we will put in place effective user reporting and redress mechanisms.”