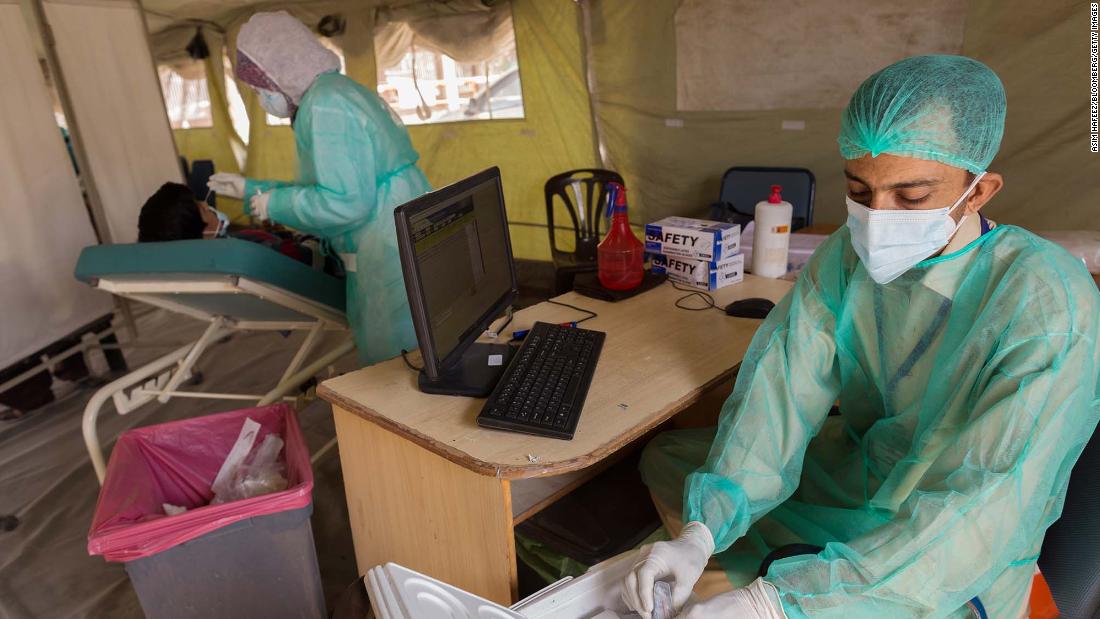 The video link was set up at the private South City Hospital in Karachi to enable relatives to feel closer to their loved ones in the ICU, as visits inside that facility are prohibited.

The screen is the closest Ameen has come to seeing his father for about 18 months. The 33-year-old flew back to Pakistan from his home in Melbourne, Australia, when his dad was hospitalized.

“Seeing him on a screen like that was pretty traumatizing for me,” said Ameen. “We told him that yes, I am here, and I want to see him healthy and smiling back again.”

But Ameen’s father didn’t survive. Instead, he became one of thousands of Pakistanis to die from the virus.

For many countries struggling in the Western world as winter cases surge, the arrival of vaccines has provided a light at the end of the tunnel. But in places like Pakistan, that tunnel remains in near darkness.

“The vaccine is not here in this country for the foreseeable future,” says Dr. Nashwa Ahmad, Coordinator of Covid Services and Research and Development at South City Hospital.

“That means our health care workers still have to continue to do their jobs, (and) endless hours, without the protection of the vaccine.

“A vaccine would definitely have given us the additional boost we needed to continue on with fighting the disease.”

The hospital has been overwhelmed with “a tsunami of patients,” Ahmad says. The three Covid-19 ICU wards are full, and more patients are waiting in ambulances outside.

So far, Pakistan has officially recorded more than half a million cases of Covid-19, and more than 11,600 related deaths — although health officials tell CNN that testing is not sufficient to reflect the true picture.
Pakistan has secured 1.2 million doses from China’s Sinopharm, with 500,000 expected to arrive this weekend, but they will barely make a dent in vaccinating the country’s population of 216 million. Health workers in major cities are due to start receiving shots next week, and negotiations are underway for vaccines from other manufacturers, says Asad Umar, the chief of the National Command and Operations Centre.

Pakistan’s health minister confirmed this week that his country will also receive 17 million doses of AstraZeneca’s coronavirus vaccine in 2021.

About 6 million of those doses are expected in the country in March with the remaining batches following in the second quarter of the year.

Pakistan is also pinning its hopes on COVAX, the global initiative to provide up to 2 billion vaccine doses to the most vulnerable 20% of the world’s poorest populations, formed by Gavi, the Vaccine Alliance, the World Health Organization (WHO), and the Coalition for Epidemic Preparedness Innovations.

“This is an unprecedented effort,” said Aurélia Nguyen, managing director of COVAX. “We have never rolled out this number of vaccines in this short (a) time.”

The ambitious COVAX program is aimed at ensuring equitable vaccines for all, to end the “acute” phase of the pandemic. Rollouts are expected to start in February, although the exact timeline depends on regulatory approvals of vaccines in each country — as well as their readiness to administer them properly.

UNICEF will help deliver the vaccines on the ground in developing countries, where it already has a presence.

“We’ve never seen an introduction of a vaccine to so many countries in one go, that’s absolutely new, and really no vaccine has ever been deployed and introduced in so many countries so quickly,” Schreiber said.

This uncertainty is already creating anxiety in countries reliant on COVAX, he added. “Countries are looking at COVAX and don’t see yet vaccines arriving, while they see some countries are making bilateral deals, and that creates kind of a panic,” Schneider said.

Pakistan is one of 92 lower-income countries eligible for free vaccines from COVAX. Another 98 wealthier countries will also purchase doses through the organization, using it as a middle man to streamline negotiations with vaccine makers — and to prevent vaccine nationalism.
The concept of vaccine nationalism has become a significant global concern, highlighted by the ongoing public spat between the European Union and British-Swedish drug maker AstraZeneca, which recently informed the bloc it would not be able to supply the number of vaccines the EU had hoped for by the end of March. EU leaders are furious the company appears to be fulfilling its deliveries for the UK market and not theirs.

“I think we can expect that it’s not going to be all smooth sailing, as the vaccine manufacturing is scaled up and distribution happens,” Nguyen said. “I think it’s important for everyone to be able to be accountable to the commitments that they’ve made.”

Nguyen said it was inevitable that initial vaccine demand would outstrip supply. “This is exactly the reason why COVAX was created, to avoid a bidding war for vaccines,” she added.

“Without concerted effort, lower-income countries will be left behind because of the restrictions of their financial capabilities to be able to buy vaccines.”

COVAX has so far raised $6 billion from wealthier countries and other organizations, including a giant injection of $4 billion from the US, approved by Congress in December. The Biden administration also announced it would join the global initiative.

“That’s been a hugely welcome move on the part of the Biden-Harris administration,” Nguyen said. “I think it’s a very strong endorsement of the COVAX facility, of the aim to have a global and multilateral approach to fair and equitable access for Covid-19 vaccines.”

Vaccinating 20% of people in the world’s poorest countries, however, won’t be enough to help their populations reach herd immunity. Although COVAX plans to expand the program for as long as it is needed, analysis by the Economist Intelligence Unit suggests huge swathes of Asia and Africa will not see widespread availability of Covid-19 vaccines until 2022 or 2023.
Pakistan’s Prime Minister, Imran Khan, addressed this issue during the UN Conference on Trade and Development on January 25, calling for more to be done to help vaccinate the developing world.

“It will take much longer for the vaccine to fully cover the global south,” Khan said. “The coverage of the COVAX facility must be expanded. This will enable the developing countries to spend their precious resources on socioeconomic development needs.”

Many of the richer countries self-funding vaccines in COVAX do understand the importance of a united solution to the pandemic. Singapore, for example, has pledged $5 million to COVAX to fund vaccines for poorer countries.

“This is borderless, this is a problem without a passport, it doesn’t need a visa,” says Umej Bhatia, Singapore’s Permanent Representative to the United Nations Office and member of the “Friends of COVAX” group.

But still, the global race to procure vaccines directly from manufacturers is gathering pace.

“Vaccine nationalism is the is the evil twin of COVAX,” says Jerome Kim, Director General of the International Vaccine Institute. “A lot of the countries that signed up for COVAX, the high-income countries in particular, hedge their bets by putting in pre-orders for Covid-19 vaccines.”

“(Now) COVAX is at the back of the line,” Kim said, although he added the situation could change with wealthier countries ultimately donating excess vaccines back to COVAX.

Alarm over the growing chasm has been raised by the WHO director-general, Tedros Adhanom Ghebreyesus.

“I need to be blunt,” he said. “The world is on the brink of a catastrophic moral failure. And the price of this failure will be paid with lives and livelihoods in the world’s poorest countries.”

Of 39 million vaccines administered globally by January 18, Ghebreyesus said, just 25 doses were given in a lower-income country.

“I think the rich-poor divide is always going to be there,” said Dr. Naseem Salahuddin, Head of the Department of Infectious Diseases at the public Indus Hospital in Karachi. “We have learned to accept that the West is always privileged. Since they have invested all the money in developing the vaccines, they’re going to be in the front line anyway.”

As the vaccine divide grows internationally, an internal divide between the rich and poor is also expected to emerge — and for many middle-class and wealthy Pakistanis, flying abroad might be the only option to receive a vaccine anytime soon.

The market for vaccine tourism is taking shape. An exclusive lifestyle club called Knightsbridge Circle, based in London, has started offering trips to Dubai to enable the ultra-rich to skip the vaccine queue. For its members, who pay 25,000 British pounds ($34,000) a year, the package includes flights, accommodation, and two doses of the vaccine three weeks apart.

From this week, the company is also offering a package for non-members, which starts at 10,000 British pounds ($13,685), including two doses of the vaccine plus transfers from the airport and the vaccine center. The scheme will only be available to the over-65s or those with pre-existing conditions. The founder, Stuart McNeill, said they decided to do this in the UAE because the population already has free access to the vaccine.

For Daniyal Ameen in Karachi, the option of paying for his family to receive vaccines abroad is an attractive prospect.

As well as losing his father to Covid-19, his mother was also hospitalised with the coronavirus, although she has since recovered.

“If there is an opportunity for me to get myself or my family vaccinated, of course I’m going to get that,” he says. “Whatever it takes to do that, because I have seen that very personally that all my family members were affected by Covid.”

As a middle-class family, they’re among the lucky ones who may have the financial means to make it happen.

Bigger problems may also face Pakistan — and many other countries — even when vaccines eventually arrive.

Misinformation about Covid-19 is rife in Pakistan. Many people refuse to believe the virus even exists, and therefore they don’t plan to take a vaccine even if it is offered.

The National Library of Medicine in the US released a study in June 2020 warning that the threat of vaccine hesitancy in Pakistan would hamper the country’s Covid-19 efforts — and advised measures to counteract the “misleading narratives.” Pakistan is “quite vulnerable to such conspiracy narratives and has experienced failures of polio vaccination programs because of such claims,” the study said.
Pakistan’s failure to stop the spread of polio is due in part to a historical distrust of foreign healthcare providers, concerns that were inflamed after allegations surfaced that US intelligence officials had used a fake vaccination program in the city of Abbottabad as part of efforts to capture Osama bin Laden in 2011.

“My apprehension is the acceptability amongst the general population,” says Salahuddin, from Indus Hospital. “The average man on the street is not very impressed with the whole pandemic, they are in denial, and they may not even want to take the vaccine.”

In a bustling outdoor market in the capital Islamabad, motorbikes snake past the roadside vendors, and families mill around the stalls — shopping for mobile phones, fresh vegetables, or snacking on fresh bread and kebabs. Masks are on sale in one stall, but most people don’t wear them.

“In Pakistan, the first thing is that mostly people don’t believe that corona exists,” says customer Mohammad Armaghan, 21. “They just won’t get vaccinated.”

“There’s no need for a vaccine. This corona is nothing, we have faith in Allah, we don’t wear masks, we don’t need any protection,” says another customer, Ghulam Ali Chauhan.

Back at South City Hospital in Karachi, such misconceptions are what keeps Ahmad awake at night, worried that Pakistan could ultimately fail to emerge successfully from the coronavirus crisis.