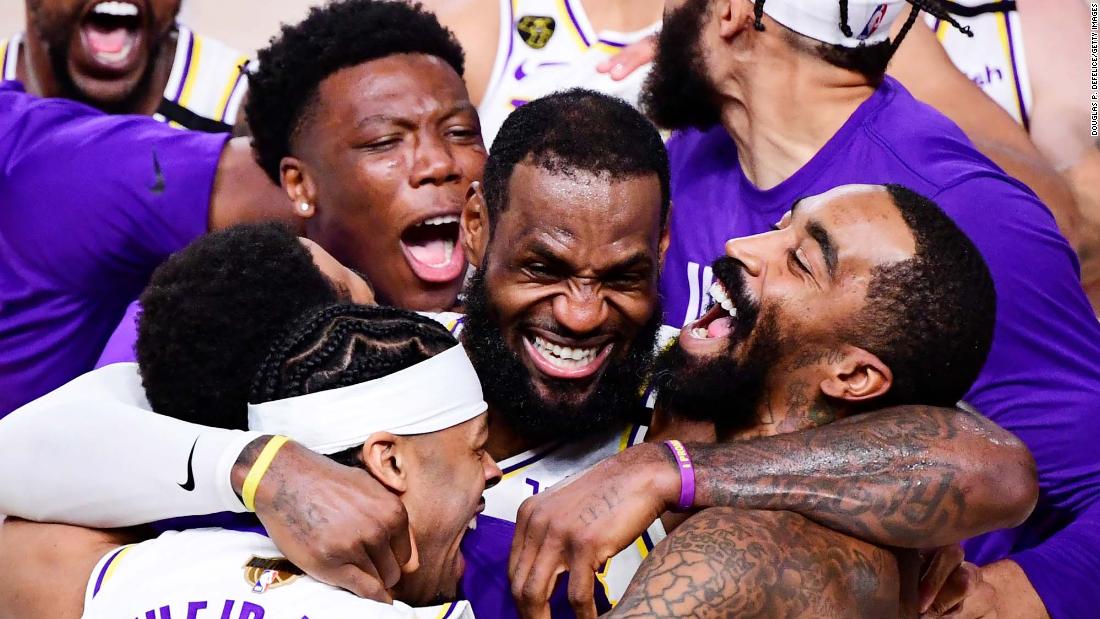 It has been just 71 days since the Los Angeles Lakers won the 2020 NBA championship. The Lakers will take on the crosstown rival Clippers in one of the two opening night fixtures on Tuesday.

In the other opening day game, the Golden State Warriors will face the Brooklyn Nets.

In contrast to the Lakers, the Warriors have not played a game since March 10 — 287 days ago.

These differences between teams could play a significant role in the outcome of the season.

The Lakers are favorites to repeat their 2020 win, but as we go deeper into the season, fatigue may set in for a number of returning players.

The team has been busy in the offseason, adding probable starters Marc Gasol, 35, and Wesley Matthews, 34, alongside reigning NBA Sixth Man of the Year Montrezl Harrell.

The Lakers’ likely starting line up of James, Anthony Davis, Gasol, Matthews and Kentavious Caldwell-Pope appears formidable. But an average age of 31.6 years on opening night makes it one of the oldest starting fives in NBA history.

LeBron James will turn 36 just over a week after the season begins, and while he continues to defy the expectations of age that affect the rest of the league, this next season could be the true test of his greatness as a player and as a leader.

Giannis and the Bucks

One of the biggest stories to come out of the offseason is the supermax five-year contract extension signed by Giannis Antetokounmpo to stay with the Milwaukee Bucks.

It’s worth $228.2 million and is the largest in NBA history.

Some thought Antetokounmpo might leave the Bucks, but he remained loyal, saying on social media: “This is my home, this is my city. I’m blessed to be able to be a part of the Milwaukee Bucks for the next 5 years. Let’s make these years count. The show goes on, let’s get it.”

“I know there’s probably more attention and more media when guys move and change, but I reflect on the guys who have stayed,” said Budenholzer.

“For me, a guy like Tim Duncan, a Kobe Bryant, Dirk Nowitzki, guys like that, that have stayed in one place and have made it kind of their legacy to win and win championships and win at a high level, wherever it is that they were drafted, whether it be a big market, a small market.”

A championship would certainly leave a legacy in Milwaukee for Antetokounmpo.

The Bucks dominated the 2019-20 regular season, finishing with the best record across the league.

When the playoffs came around though, the team underperformed, losing its opening fixture to the eighth seed Orlando Magic, before going on to crash out in the Eastern conference semifinals to the eventual runners up Miami Heat.

Despite the damp end to the season, Antetokounmpo went on to win NBA MVP for the second year in a row.

For Antetokounmpo’s contract to be worth it, for both parties, he has to bring the city its second NBA title — and what better year to do it than the 50th anniversary of its first triumph in 1971.

Will Harden go to Brooklyn?

After his initial holdout, James Harden is back in Houston. But for how long?
While he is rumored to be happy with a trade to a number of teams, the one which arguably makes the most sense for Harden is to the Brooklyn Nets where he could form a super team with Kyrie Irving and Kevin Durant.

With those three lining up in black and white in New York, the Nets would immediately become legitimate contenders.

Even if Harden stays with the Rockets, the future doesn’t look bright for the team and it could be mutually beneficial for the eight-year relationship to come to an end.

A hard reset for Houston may be the only way out of this situation.

Is the Golden State dynasty over?

Between 2015-2019, the Golden State Warriors reached the NBA Finals every season, winning three titles. In 2020, the Warriors finished with the worst record in the entire NBA, netting only 15 wins in 65 games.

Missing stars Steph Curry, for most of the season, and Klay Thompson, for all of it, proved too much of a loss for the team.

In return for a dismal season, the team earned the second overall pick in the NBA draft, where 7-foot-1-inch center James Wiseman was selected.
Wiseman had a rocky year for Memphis, playing just three games for the Tigers, but his talent is indubitable.

The upcoming season posed a hope for the team to prove that the 2019-20 season was a blip, and that the return of Curry and Thompson, along with the addition of Wiseman, could see the team back in contention.

Unfortunately, that won’t happen. Not because the team will definitely fail to contend, but because Thompson tore his right Achilles tendon in a late November workout and will sit out the season for the second successive year.

Unless other players step up significantly, it is hard to see that the Warriors prove that 2019-20 was a blip.