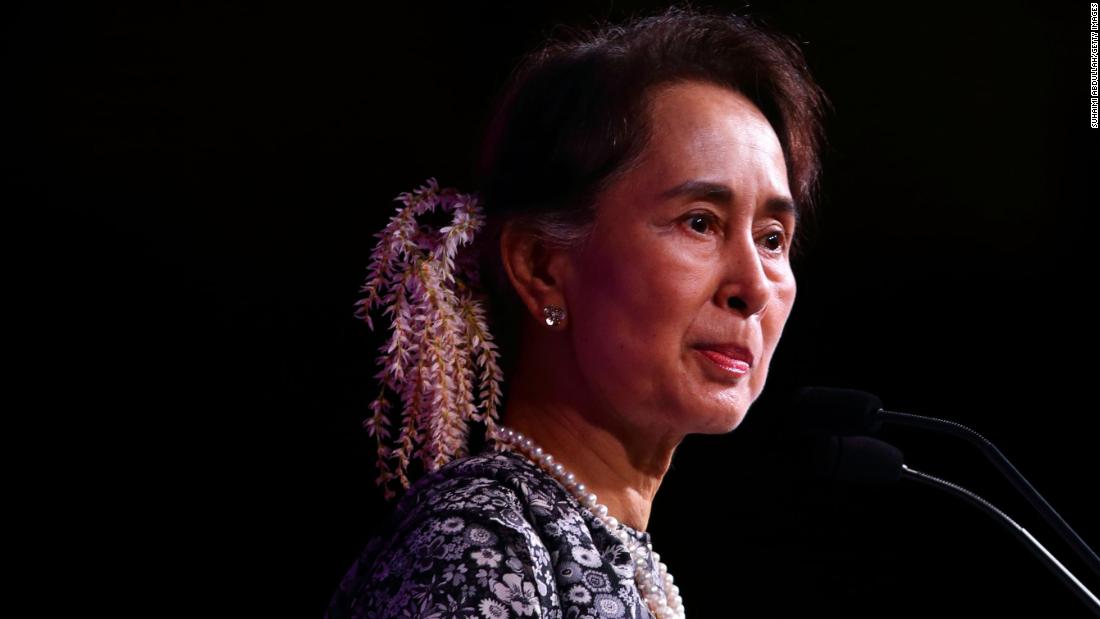 The country woke up to widespread communications blackouts, closed banks, and soldiers in army fatigues patrolling the streets of Myanmar’s largest city, Yangon. Residents turning on their television sets could only access the military-owned Myawaddy TV channel, with all other news channels seemingly blocked.

As news filtered through that the country’s democratically-elected leaders had been detained in the capital — hours before the first session of the new parliament was set to open — a news anchor announced on the military-owned channel that power had been handed over to army chief Min Aung Hlaing.

In the address, the military confirmed it had detained the country’s de facto civilian leader Suu Kyi, along with other high ranking National League for Democracy (NLD) leaders, in response to alleged voting irregularities in November’s election.

The coup followed weeks of worsening political tensions in the country over the disputed election and rumors that the military could take over had been swirling for days.

The election was only the second democratic vote since the country emerged from 50 years of isolationist military rule in 2011. Suu Kyi’s party, the NLD claimed an overwhelming victory, taking 83% of the vote, which granted it another five years in government. The military-backed Union Solidarity and Development Party won 33 out of a possible 476 seats, far fewer than the party had expected.

Monday’s events have been widely condemned internationally, with the United States calling on Myanmar’s military leaders to “release all government officials and civil society leaders and respect the will of the people.”

“The United States expresses grave concern and alarm regarding reports that the Burmese military has detained multiple civilian government leaders, including State Counsellor Aung San Suu Kyi, and civil society leaders,” according to a statement from the US Secretary of State Antony Blinken. “The military must reverse these actions immediately.”

Army chief Min Aung Hlaing, who is now running the country, has been under US sanctions since December 2019. He was designated for serious human rights abuses related to the atrocities committed against the Rohingya Muslim community.

“I have a sinking feeling that no one will really be able to control what comes next. And remember Myanmar’s a country awash in weapons, with deep divisions across ethnic and religious lines, where millions can barely feed themselves.”

What led to the coup

In its announcement, signed by the newly installed acting President and former military general, Myint Swe, the military alleges that voter fraud took place in the November 8, 2020 elections and said they had detained political leaders for “failing to take actions, not following the request to postpone lower house and upper house parliament sessions.”

Last week, a military spokesperson said it would not rule out a coup if the military’s claims of alleged voter fraud into the November 2020 election were not investigated.

Myanmar’s election commission on Thursday rejected claims of voter fraud, saying any errors — such as duplicated names on voter lists — were not enough to impact the result of the vote.

Nobel laureate Suu Kyi is widely considered a hero of democracy in Myanmar, where she spent 15 years under house arrest as part of a decades-long fight against military rule.

Following her release, Suu Kyi led her party to a landslide victory in Myanmar’s 2015 elections, establishing its first civilian government after decades of isolation and military authoritarianism.

But her international reputation has been tarnished in recent years by allegations of genocide against Myanmar’s Muslim Rohingya population. Myanmar denies the charges and has long claimed to have been targeting terrorists.

On Monday human rights non-government organization Burma Rights UK said in a post to their Twitter that the news of Suu Kyi’s detention was “devastating.”

“This needs to be met with the strongest international response. The military need to be made to understand that they have made a major miscalculation in thinking they can get away with this,” the group said.

As military leaders seized power, there were significant internet and phone network disruption across the country, which could affect the ability of people to get information or organize any response via social media.

Netblocks, which monitors internet blackouts around the world, said that real-time network data showed a major drop in connectivity in the early hours of Monday morning. Doug Madory, an analyst at Kentik, a network observability company, added on Twitter that there was a “large internet outage” unfolding.

“Continuing disconnections have been monitored with national connectivity falling initially to 75% and subsequently 50% of ordinary levels by 8:00 a.m. local time,” according to Netblocks.

Reuters reported that Myanmar state media MRTV was having technical issues and unable to broadcast, the network said. “Due to current communication difficulties we’d like to respectfully inform you that the regular programs of MRTV and Myanmar Radio cannot be broadcast,” Myanmar Radio and Television said on a post on its Facebook page.

Later in the day, MRTV began broadcasting military propaganda with footage of soldiers waving flags on top of sandbags, helicopters hovering over military personnel and paramedics carrying a stretcher.

Banks in Myanmar are also temporarily shut due to widespread internet disruptions, according to a Myanmar Bank Association statement. The Chair and Central Working Committee of the Myanmar Banks Association held an emergency meeting Monday morning and decided that banks should cease operations until the internet connection improves.

The military action has prompted concern and condemnation from the international community.

US President Joe Biden has been briefed on the situation in Myanmar by National Security Adviser Jake Sullivan, according to a statement from White House press secretary Jen Psaki.

“The United States opposes any attempt to alter the outcome of recent elections or impede Myanmar’s democratic transition, and will take action against those responsible if these steps are not reversed,” the statement said. “We are monitoring the situation closely.”

Australia on Monday called for the immediate release of Suu Kyi and other senior leaders who are being detained by the military.

In a statement from Australia’s Department of Foreign Affairs and Trade, Marise Payne the Minister of Foreign Affairs said, “The Australian Government is deeply concerned at reports the Myanmar military is once again seeking to seize control of Myanmar.”

“We call on the military to respect the rule of law, to resolve disputes through lawful mechanisms, and to release immediately all civilian leaders and others who have been detained unlawfully,” the statement said.

Indonesia’s Ministry of Foreign Affairs also expressed concern over the situation in Myanmar, saying in a statement that it “underscores that all electoral differences be addressed in accordance with available legal mechanism” and urged “all parties in Myanmar to exercise self-restraint and put forth dialogue in finding solutions to challenges so as not to exacerbate the condition.”

The sudden coup has surprised many observers, who point out that the military already wields significant power.

In 2008, the ruling junta drafted a constitution that allocated 25% of legislative seats to the military as well as control of key ministries such as defense and home affairs, and a veto power on constitutional issues.

UN Special Rapporteur on Human Rights for Myanmar, Tom Andrews, told CNN that the coup is a “real mystery.”

“They wrote the constitution that they just overthrow. It gives them enormous power, economic power, political power,” he said. “So how and why they overturn their own constitution is incredible.”

Last week, the military sought to allay concerns it was about to seize power, saying that it would protect and abide by the constitution, according to Reuters.

Andrews said their action is “extremely damaging” and comes at a time when many in the country are suffering extreme hardships because of the coronaviorus pandemic.

“The people of Myanmar have been through so much. They’ve lived through decades of brutal military rule. They are going through a pandemic. The economy is in tough shape for so many. It’s so incredibly unfair for them to have to go through this right now,” he said.