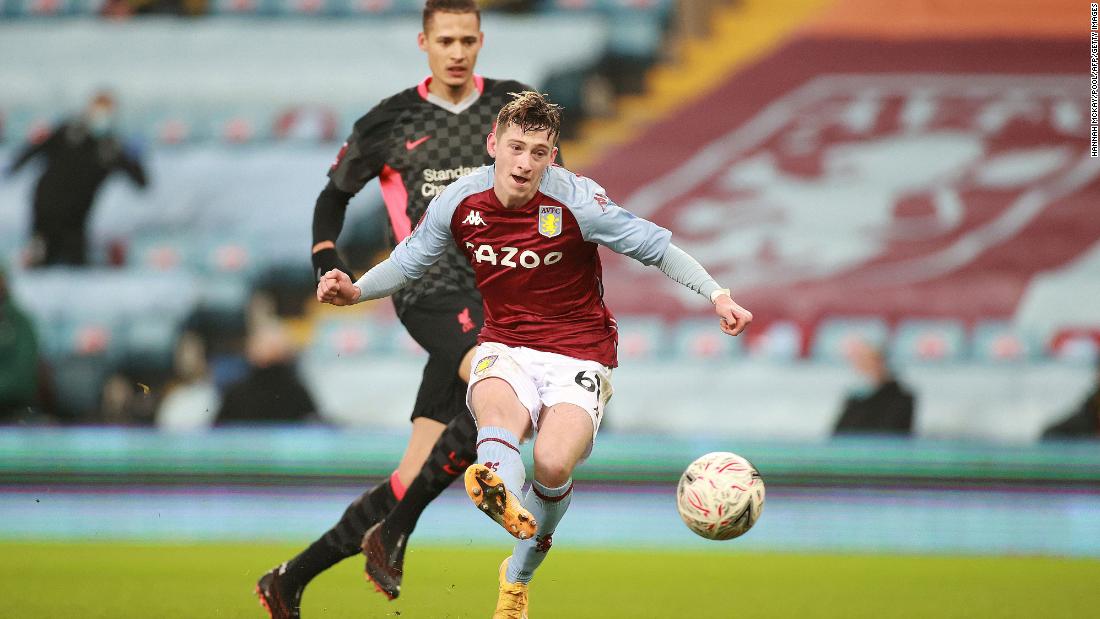 The 17-year-old was part of a youthful Aston Villa team — with an average age of 18 years — that was beaten by Liverpool in the English FA Cup third round on Friday. The FA Cup, which was founded in 1871, is the oldest domestic association cup competition.

Against a strong Liverpool team that included the likes Mo Salah and Sadio Mane, Villa was forced to field a team of youngsters after the club suffered a Covid-19 outbreak earlier the week. The 11 players that started the game for Villa were all making their first-team debuts.

“Our experience of this situation in the past two days has been a frightening scenario because we went from 100% negative on 1 January to 14 cases,” Villa chief executive officer Christian Purslow told BT Sport.

“Many of the players tonight are so young their mums and dads will be dropping them off at Villa Park.”

Liverpool took an early lead through Mane’s header but a wonderful solo goal by Barry ensured Villa were level at halftime.

Midfielder Thiago Alcantara came on for Liverpool at the start of the second half and his introduction swung the game in the visitors’ favor, with goals from Georginio Wijnaldum and Salah as well as another Mane header ensuring victory for Jurgen Klopp’s team.

But it was Barry’s goal and his post-match interviews, where he understandably just couldn’t stop smiling, that encapsulated the vim and vigor of the Villa performance.

“I feel the team deserved it as well for how we applied ourselves to the half, and even the second half,” a beaming Barry, who joined the Birmingham-based team from Barcelona last year, told Villa TV.

“When I scored, it was a surreal moment. You could see all the relief coming out of me and the team, everyone jumping on each other.

“It was the best moment of my life and probably their lives as well.”

After the game Barry swapped shirts with Liverpool’s Brazilian international Fabinho, before the teenager had second thoughts about not keeping the top in which he debuted.

He ran after Fabinho, who then gave Barry back his Villa shirt — and let the 17-year-old retain the Liverpool defender’s top.

“The kids did really well,” Klopp said. “We had problems in passing and moving. Too many on the wrong side of the ball, not enough recoveries of passes.

“We had chances and shot directly at the goalie. It was rusty but better in the second half. We have a lot players with no rhythm.”

Earlier this week the English Premier League announced 40 new positive Covid-19 cases among players and club staff in its latest round of testing — more than double from the previous week.

In a statement on Tuesday the league said that between December 28 and 31, 1,311 players and club staff were tested for Covid-19 — of these, there were 28 new positive tests.

From January 1 to 3, Covid-19 tests were administered to 984 players and club staff, with 12 tests coming back positive.

It is the first week players and club staff have been tested twice a week for Covid-19.

As of Tuesday, four Premier League matches have been postponed this season due to Covid-19 issues.

The league added that it “continues to have confidence in its COVID-19 protocols, fully backed by the Government, to enable fixtures to be played as scheduled.”