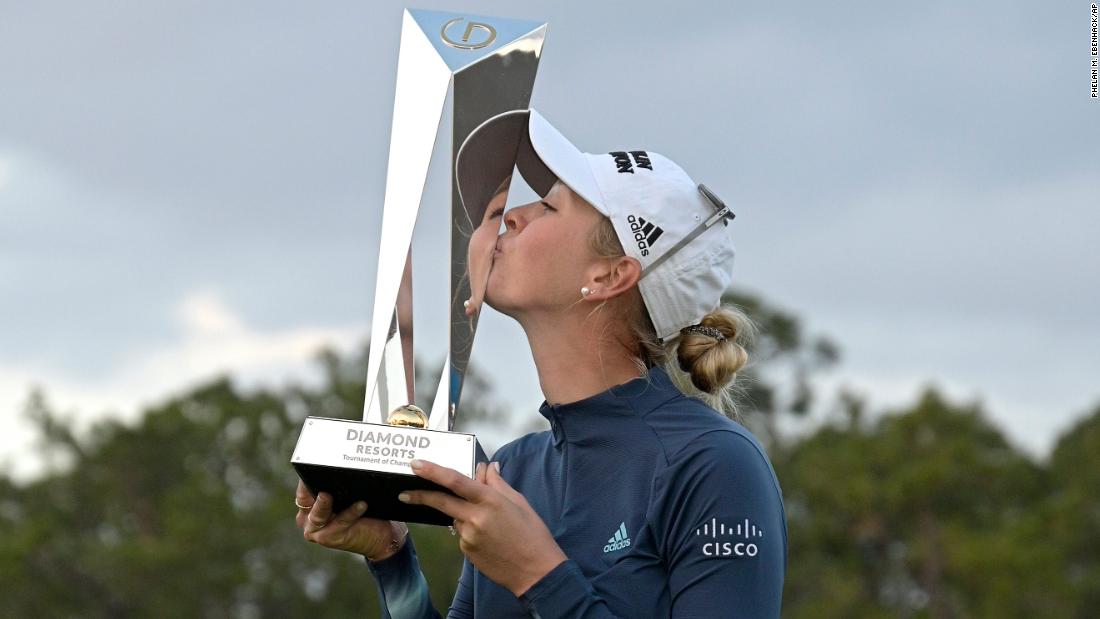 In a gripping playoff on the last day of the LPGA Tour’s Tournament of Champions in Florida, elder sister Jessica putted a 25-foot birdie to snatch victory from Danielle Kang, while world No. 4 Nelly carded the best final round score to finish third.
“I knew I was going to have to go low today,” Jessica told reporters afterwards “It was a crazy day … A crazy two days. A crazy week!”

The victory for the 27-year-old Jessica at the Four Seasons Golf and Sports Club Orlando was her sixth on the LPGA Tour, and her first in nearly three years.

It was a record-breaking weekend for Jessica, who smashed the tournament scoring record with a four-day total of 24-under 260, easily eclipsing the previous mark of 14-under 270 set by Eun Hee Ji in 2019. The win also came the day after Korda shot only the fifth 60 in LPGA Tour history.

For sister Nelly, her impressive performance underlined the superstar level she has displayed throughout her blossoming career.

“I hit it solid, putted well, tried to get as close as I could to them, but I started really far back,” said Nelly before her sister’s dramatic finale.

“I gave it a good chance and I’m happy that Jess played well.”

While the achievements of the sisters exemplify a sporting pedigree reminiscent of the Williams sisters or Manning brothers, their journey could have taken another path — following their father the professional tennis player and Australian Open winner Petr Korda.

In fact, Jessica’s victory on Sunday was her first with her parents, Petr and fellow former tennis play Regina Rajchrtová, in the gallery.

“My parents always pushed us to play a bunch of different sports, never one in particular,” Jessica told CNN’s Living Golf in 2018. “Tennis was just a sport that I played; it was never a sport that I loved to play.”

Nelly Korda, left, and Jessica Korda during the final round of the LPGA Tournament of Champions LPGA.

However, their younger brother Sebastian did, winning the junior title at the Australian Open two decades after his father’s win.

“Growing up, I always wanted to do what my sister did,” added Nelly. “She was getting lessons and I was beating golf balls right beside her, so really I started playing ever since I started walking.”

In an individual sport like golf, rivals must be envious of the sisters as they look across the green to see a face from a family that will no doubt make more headlines.

“It’s always healthy,” said Nelly. “It’s never unhealthy, we just really push each other, we help each other out, we want each other to do well.”