Jeff Bezos endorsed higher corporate tax rates. But it won’t cost him much 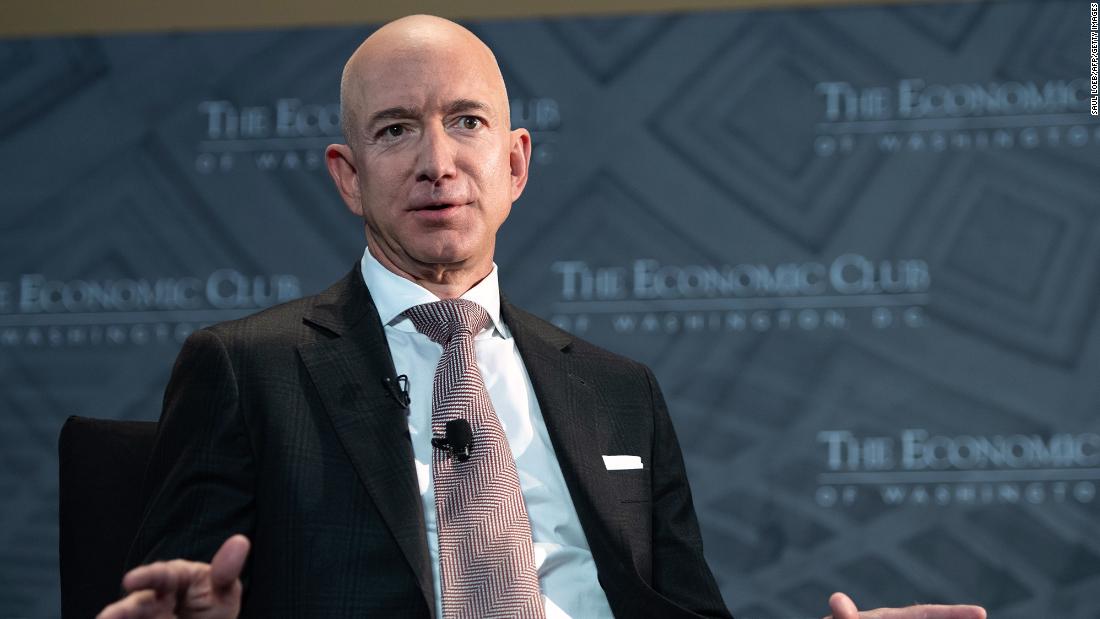 Hardly any other company leaders have come out in support of Biden’s plan. But it’s a relatively easy plan for Bezos to get behind: His company pays nowhere close to the current 21% corporate tax rate, let alone the 28% rate Biden is pitching.
According to company filings, Amazon’s federal income tax bill came to $1.7 billion in 2020. That doesn’t mean that its actual payments came to that much — but that $1.7 billion tax figure nevertheless came to only about 7% of the pretax income of the $24.2 billion it reported to investors. Thus Amazon only paid about a third of the 21% rate.
One of the only other executives to endorse higher corporate tax rates is Lyft co-founder and president John Zimmer. But with Lyft (LYFT) still losing money, his firm won’t be paying any corporate income taxes for years to come.
Amazon (AMZN) isn’t doing anything illegal or improper — or unusual. Few corporations pay 21% of their reported pre-tax earnings in corporate income tax. That’s because there are many ways to reduce the amount of taxable income subject to that tax rate.

“They care a lot less what the rate is than they do with their ability to continue to reduce their taxable income,” said Matt Gardner, a senior fellow at the Institute on Taxation and Economic Policy (ITEP), a nonpartisan think tank. “Of all the things Biden administration might try to push through, raising the corporate tax rate might be the one that hurts them the least.”

And that’s why those who advocate for raising the amount that corporations pay say it’s important that any tax law passed by Congress does more than just change the corporate tax rate. It must increase how much income is subject to taxes versus how much is sheltered from being taxed.

“Increasing the tax rate would be a tragically incomplete way of repairing that,” said Gardner.

Biden wants to increase the corporate tax rate to pay for his $2 trillion infrastructure legislation. Bezos said recently that it’s the right time for a major infrastructure investment and that Amazon is “supportive of a rise in the corporate tax rate” to help pay for it.
Amazon paid zero federal income tax as recently as 2018, making it a favorite target for those, including Biden, who argued that rich, profitable corporations are not paying their fair share.
Analysis by ITEP shows found that 55 major corporations paid zero taxes for 2020, including Nike (NKE) and FedEx (FDX). It said that there are 26 of companies that paid no taxes since the Trump tax law went into effect in 2018.

ITEP analysis also shows the average effective corporate tax rate paid by profitable Fortune 500 companies was only 11.3% in 2018, the year that Trump enacted the 21% rule. And Congress’ Joint Committee on Taxation found that US multinational corporations paid even less than that on average: 7.8%.

“This beating up on Amazon is a little overblown compared to what other companies are doing,” said Martin Sullivan, chief economist at Tax Analysts, a non-partisan, nonprofit publisher of news and commentary on tax law. “Other companies are shifting far more income into overseas tax havens. To me they’re on the borderline of the good guys.”

“It signals they’re not completely tone deaf to the political situation,” he said.

Amazon’s lower federal tax bill comes because of a number of tax breaks, none of which are disclosed by the company.

It’s likely that the most significant break was Amazon’s ability to immediately reduce its taxable income by much of its capital spending. It also likely got some breaks for its hiring, depending on how many of its new workers came from disadvantaged backgrounds. It added 500,000 workers worldwide in 2020 as it expanded its network of distribution centers.

And tax breaks for research and development spending and money spent on green energy projects also probably helped Amazon, according to experts.

The company says the reduction in its tax bill are due to tax code provisions that are good for the country and the economy.

“Our investments have grown the economy by $315 billion over the last decade while we created nearly a million U.S. jobs,” said the company’s statement. “US tax laws were designed to encourage exactly what Amazon is doing to move the US economy forward.”

Biden’s plan proposes to reduce some of the ways that companies decrease their taxable income, although many of the breaks that likely provided significant savings to Amazon would not be at risk.

Under the administration’s plans, Amazon’s taxes could see the largest increase from the proposal to impose a 15% minimum tax on the amount of money the company reports in pretax income. That could have conceivably more than doubled Amazon’s tax bill to $3.6 billion. There is also a separate provision to impose a minimum tax on companies’ overseas income.

Experts say that no matter the impact on Amazon, the proposed minimum tax on overall pretax income wouldn’t be the big source of additional tax revenue as other provisions of Biden’s plan.

“The increase in the statutory rate and the closing of loopholes that encourage profit shifting overseas, that is where you have the biggest bang for the buck,” said Frank Clemente, executive director of Americans for Tax Fairness, a group pushing for greater corporate tax collections.

But Gardner said a minimum tax on reported pretax income is important because it promotes a sense of fairness, and prevents companies from escaping higher taxes by sheltering all their income.

“It should be obvious that 21% of nothing is pretty much the same as 28% of nothing,” Gardner said.