India vs Australia, 3rd Test: Indian Team Crumble Post Lunch, All Out For 244 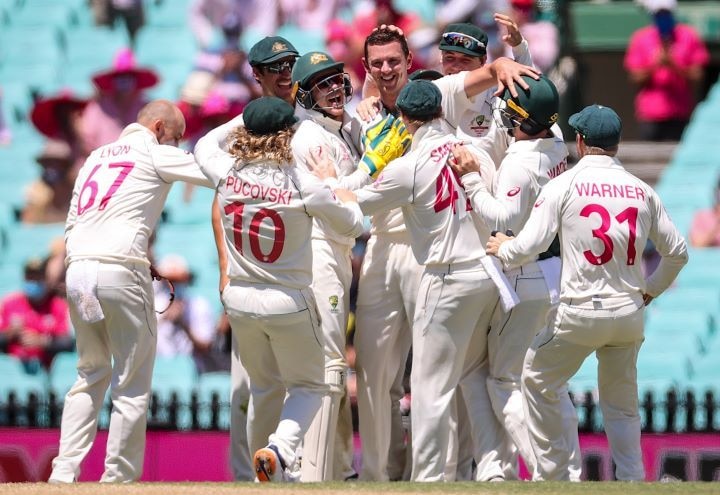 Indian team crumbled on the 3rd day losing all its wickets in the 3rd test of  India v Australia played at Sydney. Team India bowled out for 244 after resuming on their overnight score of 96 for 2. Pat Cummins (4/29) and Josh Hazlewood (2/43) bullied the visiting batsmen with short deliveries right from ball 1 today, as a result of which they shared 7 wickets between themselves.

Pujara lost his wicket after reaching his half-century, falling to delivery by Pat Cummins. Pant was dismissed by Josh Hazlewood.

The visitors began the day in a cautious manner with Pujara and stand-in skipper Ajinkya Rahane taking a slow approach. After the dismissal of Rahane and Hanuma Vihari, India increased their run-rate with the arrival of Rishabh Pant. b ut soon crumbled. Cummins dismissed Rahane, and Hazlewood registered the wicket of Vihari.  The ongoing four-match series is currently level at 1-1.

Josh Hazlewood had India batsman Hanuma Vihari out of his ground by several feet with a spectacular direct hit on the stumps to leave the visitors 180 for four.

After registering the wickets of Pant and Pujara, the hosts found it easy to get past India’s tailenders, with only Ravindra Jadeja putting up a fight. For Australia, Pat Cummins was on fire, registering four wickets against India.

Rishabh Pant has been injured and Wridhiman Saha will keep wickets for India in the next session.

Rishabh Pant has been taken for scans after having been hit on the elbow while batting.

Australia lead by 94 runs against India on Day 3 of the ongoing third Test match, at the Sydney Cricket Ground.