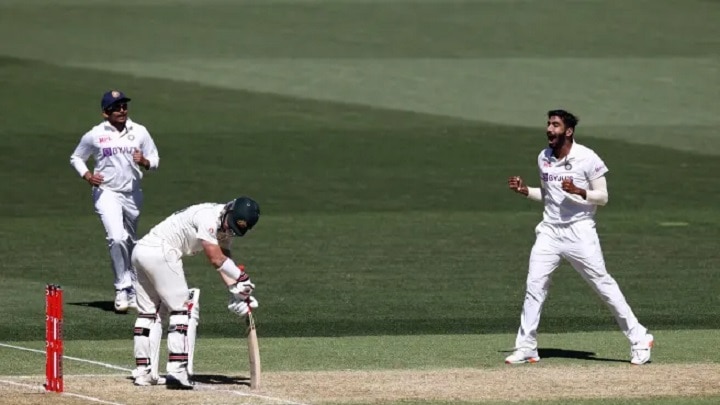 After getting bowled out for 244 in the first innings, India struck back as Jasprit Bumrah bowled a brilliant opening spell to dismiss Australian openers.

Umesh Yadav and Jasprit Bumrah started with consistent lines outside off that enabled four maiden overs on the trot against Australia’s new-look opening pair of Joe Burns and Matthew Wade. With the opening stand looking steady, Australia looked set to take control of the opening session.

However, Jasprit Bumrah in his second spell corrected his lines by attacking the stumps more often. It resulted in both openers being trapped LBW, with DRS decisions supporting the umpire’s call on both occasions. The wickets gave India a big boost and helped offset an abject collapse earlier in the day.

Umesh Yadav (6-4-6-0) and Mohammed Shami (9-0-19-0) also kept a tight leash on the Aussie batters as they were a little more on the shorter side during the session.

Marnus Labuschagne (16 batting, 15 balls) lived a charmed life when Wriddhiman Saha missed a tough but gettable caught behind off Bumrah. The Australia No. 3 was lucky when Bumrah dropped a dolly at fine leg after the batsman had mistimed a pull shot off Shami.

As soon as Bumrah hit the double strike but dropped Labuschagne, Twitter was flooded with reactions and memes

Bumrah strikes and gets the first wicket for #TeamIndia. Wade departs. BOOM into the act ????#AUSvIND pic.twitter.com/01qDdp6AL6

Earlier, it only took less than four overs for Australia to wipe out the Indian tail. Overnight batsman Ravichandran Ashwin was the first to depart off the third ball of the day, caught behind of Pat Cummins followed by a similar dismissal of Wriddhiman Saha in the next over off Mitchell Starc. Umesh Yadav became Starc’s fourth scalp of the innings and Cummins ended the innings with a bouncer to Shami, caught at forward short leg.