IND Vs ENG 3rd Test: Will Broad And Anderson Play Together In The Third Test Despite England’s Rotation Policy? 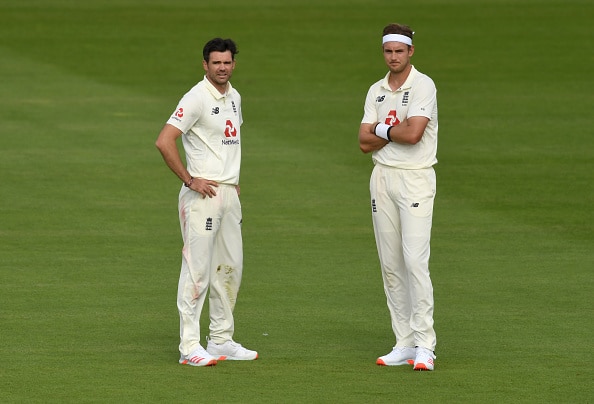 India vs England 3rd Test: Stuart Broad hinted at playing with James Anderson in the upcoming Test match despite the players’ rotation policy of England cricket. In an article for Daily Mail, Stuart Broad spoke about variety of issues from Chennai pitch issue to the rotation policy adopted by the England cricket management. The players’ rotational policy of England and Wales Cricket Board (ECB) is adopted to manage the work load of players and to keep the players fit for the ICC competitions.

There are as many as eight ICC competitions in the upcoming eight years which might take a toll on the players in terms of fitness and form. Thus, to tackle these problems and to give adequate rest to players, the England team has adopted a unique rotation policy wherein players are dropped and picked in the laying eleven as per the requirement of the game. For example, Jimmy Anderson was dropped in the second Test after having a great first Test match to pave way for Stuart Broad as per the rotation policy. Similarly, Moeen Ali was dropped from the team for the last two Test matches so that he is fit to play the white-ball matches of the series.

Will Broad and Anderson play together?

Broad and Anderson have only played together in nine Test matches in the last two years. The talk of both the premier fast-bowlers together in the side is gaining momentum. Broad in his column wrote, “There has been talk of this being the match most likely for myself and James Anderson to play in the same team this winter but it is all guesswork for the next few days. Selection can only really take place after a look at the pitch on Tuesday or even on the morning of the game.”

We will have to wait till Wednesday to understand what might happen in the England playing 11. But Broad suggested that there might be ‘three fast-bowlers and Ben Stokes and one spinner’ at the Motera on Wednesday as the conditions might help the seam bowlers, thus the expectancy of Broad and Anderson playing together is quite high.

You may also like | IND Vs ENG: Michael Vaughan Takes A U-Turn, ‘Totally Agree’ With Rohit On Chepauk Pitch Woes, Was He Sarcastic?

Rubbishing allegations by cricketers criticizing the Chennai’s pitch, Broad wrote that it is normal to prepare pitches that suit the home team. He said: “There is no criticism of the second Test pitch from our point of view. That’s exactly what home advantage is and you are well within your rights to utilise that. Why wouldn’t India play on pitches that turn square and upon which first innings runs are vital? They outplayed us on a pitch that they are very skilled on but one very alien to us.”

Broad’s love for the Motera

Stuart Broad had posted on Twitter about the Motera stadium. He also wrote about it in the Daily Mail article. “I have to say that this new stadium at Motera, the biggest in the world, is so impressive that it has a bit of an aura about it even when empty. It’s like a coliseum,” Broad wrote.

We will update you on all the news related to India vs England. Keep following ABP News Sports for more.