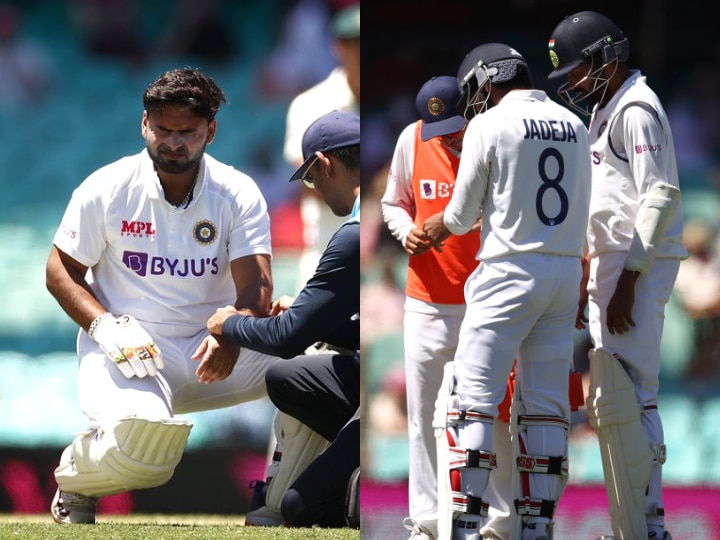 The Indian dressing room which is already battling the void left behind by Captain Virat Kohli for the rest of Australia tour, is now more worried as two of the boys — wicket-keeper Rishabh Pant and all-rounder Ravindra Jadeja– were injured and taken to the hospital for scans on Saturday, the day three of the ongoing third Test against Australia at the Sydney Cricket Ground. ALSO READ | India vs Australia, 3rd Test: Indian Team Crumble Post Lunch, All Out For 244

Early in the match today, Rishabh Pant was hit on the arm while batting a Pat Cummins Short delivery. Despite being in tremendous pain after being hit on the left elbow, Pant continued to bat and hit a couple of more runs before edging a delivery from Josh Hazlewood to David Warner. Pant was dismissed for 36 (67) by Hazelwood in the post-lunch session. Substitute Wriddhiman Saha filled in the spot of Pant in the final session of Day 3.

“Rishabh Pant was hit on the left elbow while batting in the second session on Saturday. He has been taken for scans,” the BCCI tweeted.

Later, the in-form all-rounder Ravindra Jajdeja too was taken for scans following a blow to his left thumb while batting a Mitchell Starc short delivery. The southpaw too continued batting in pain after a brief break and returned unbeaten for 28.

Despite his late flurry, India were bowled out for 244 runs in their first innings, with hosts taking a crucial 94-run lead. The injured duo did not take the field when Australia openers arrived to kick start Australia’s 2nd innings.

ALSO READ | Ind vs Aus Brisbane Test In Major Doubt! Here’s What You Need To Know

Earlier, in the series, India lost Ishant Sharma, Mohammed Shami, KL Rahul and Umesh Yadav due to their injuries, and Virat Kohli to Paternity leave. Owing to the Covid-19 pandemic, it is not possible for Team India to fly in replacement.

The bruised Indian team-management is now hoping that the injury is not a serious one and that the players remain available for the remainder of the series.