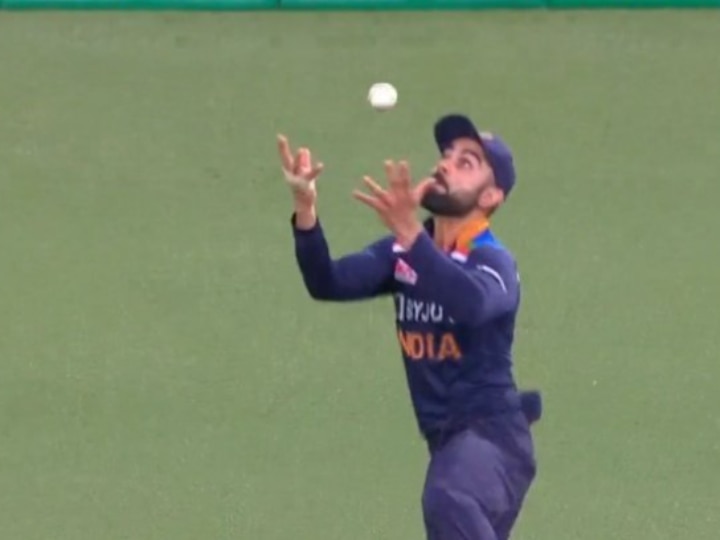 The second T20 of the three-match series between India and Australia is being played at the Sydney Ground. Virat Kohli, the captain of the Indian cricket team, has opted to bowl first after winning the toss. For Australia, stand-in skipper Matthew Wade was the highest run-getter and helped Australia reach a mammoth 194/5 after being put to bat first by India. Wade got run out after scoring 58 runs off 32 balls. The flamboyant batsman reached his half-century off just 25 balls. During his innings, Wade hammered 10 boundaries and a six.

One of the most discussed and hyped moments so far in this match was of Virat Kohli dropping Mathew Wade. What got the fans talking on twitter was that even after a humiliating fumble, Kohli helped India quickly recover by sending dangerous looking Matthew Wade back to the pavilion after getting him run-out in the 8th over of Australia’s innings. After this, there was a flood of memes on Twitter.

On social media, a user tweeted and wrote: “Jo Aya Hai Wo Jayega Bhi, Magar Kohli Ki Marzi Sai”. Another user wrote that one of the most hilarious moments during the match was, runout of Australian team skipper Matthew Wade. Here are some of the hilarious memes shared by netizens on social media

In arena footage from Kobe’s famous buzzer beater over Wade on this date in 2009! ♾

Virat Kohli dropped the catch, but somehow managed to run out Wade.#AUSvIND pic.twitter.com/VQdBC4jems

Kohli drops But you still

When kohli But still he

Wade having a conversation with other players 🙂 pic.twitter.com/VMaYzeqgcg

Wade as Middle wade as

#Aussies when #ViratKohli Drops Catch, but Wade gets Run Out pic.twitter.com/UlTfsZkTz7

After winning the first match in Canberra, Virat Kohli won the toss and decided to bowl first. In the second T20 match being held in Sydney, Australia had set a target of 195 runs to win in front of India. In the absence of Aaron Finch, stand-in skipper Matthew Wade scored a hasty 58 for Australia while Smith contributed with valuable 46. Young sensational speedster T. Natarajan proved to be the best bowler for the Indian team. He took 2 wickets for just 20 runs in his 4 overs.