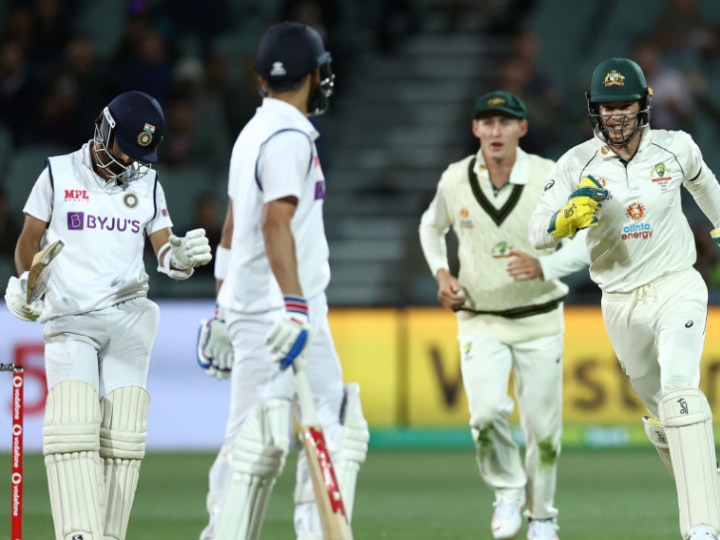 After Virat Kohli (74) and Cheteshwar Pujara’s (43) solid 68-run partnership, team India completely lost its way under the lights as Australian speedsters wreaked havoc in the final session and picked three wickets for 19 runs to restrict the visitors to 233/6 on the opening day of the first Test at the Adelaide Oval. Wicket-keeper batsman Wriddhiman Saha and Ravichandran Ashwin batted well in last few overs of day’s play to ensure that team India don’t lose wickets before the end of play.

For Australia, Mitchell Starc was the pick of the bowlers as he took two wickets while Josh Hazlewood, Pat Cummins and Nathan Lyon took 1 wicket each. The second session was over after India scored 107 runs. 126 runs fell for three wickets in the third and final session.

India’s most important wicket – Virat Kohli got run-out after a mix-up when he was trying to steal a single with Rahane. The Indian skipper was dismissed after scoring 74 runs. Prior to this run-out, Virat witnessed two half-century partnerships. First, he stitched for the third wicket with Pujara and the other he got for the fourth wicket with Rahane. Virat-Pujara shared a solid 68-run partnership while the skipper attained an 88-run partnership between him and Rahane.

ALSO READ | India Vs Australia: ‘Absolutely Clear In My Mind’, Says Virat Kohli On Decision To Return For Birth Of First Child

Within seven overs after Virat’s dismissal, India lost two wickets for scoring just 19 runs. Australia took the second new ball during the game that helped fast bowler Stark get 5th wicket for the Aussies as Rahane, who got LBW out was dismissed after scoring 42 runs. Hanuma Vihari plumbed in front for 16 with Aussies getting second wicket with second new ball.

In the first innings of the Pink Ball Test, Virat Kohli completed his half-century. He achieved this feat from 122 balls. During this, he also shared a 68-run partnership with Pujara for the third wicket. Kohli’s half-century innings included 5 blistering fours.