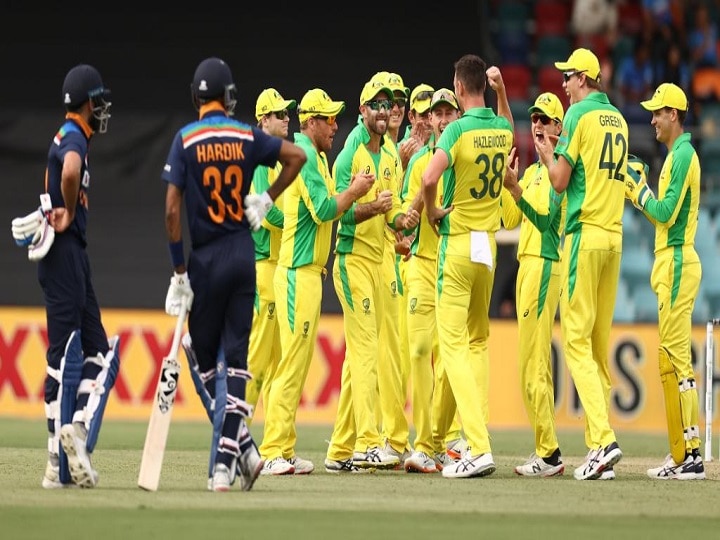 Virat Kohli-led Team India posted a competitive 302-run total against hosts Australia batting first in the third One Day International of the 3-match ODI series being played at the Manuka Oval in Canberra.

Batting first after skipper Virat Kohli won the toss, India lost in-form opener Shikhar Dhawan early as he fell to seamer Abbott for 16. Promising youngster Shubman Gill then stitched a handy half century partnership with skipper Kohli for the second wicket to take the visitors near the 100-run mark.

Spinner Agar broke the threatening Kohli-Gill stand by trapping Gill leg before wicket for 33. Skipper Kohli continued to tick the scoreboard by milking the singles and forging a quick-fire partnership with Shreyas Iyer.

Agar and Zampa Peg Back India With Quick Strikes

Iyer was India’s third wicket to fall after leg spinner Zampa sent the elegant batsman back to the pavilion. India were in a spot of bother when wicket-keeper batsman KL Rahul was dismissed leg before wicket by Agar for just 5 runs.

Hardik Pandya walked out in the middle to join after Rahul’s dismissal, scored runs at a brisk pace to take India past the 150-run mark.

Skipper Virat Kohli, who became the fastest cricketer to score 12000 ODI runs was dismissed by his nemesis Josh Hazlewood soon after he got to his 60th half ton.

Back-to-back half-centuries for Virat Kohli in the #AUSvIND series!

With dismissal of skipper Kohli, all-rounder Ravindra Jadeja joined Hardik Pandya at the crease to revive the faltering innings with a 50-run partnership for the sixth wicket. Pandya got to his second fifty of the series with a breezy knock.


This is the second time that he has made two half-centuries in a bilateral ODI series.#AUSvIND pic.twitter.com/2Ki8YLZYnA

Hardik Pandya and Ravindra Jadeja stepped onto the acceleration button in the last five overs by striking some lusty blows to all corners of the green turf at the Manuka Oval. Left-hander Jadeja tore into seamer Sean Abbot, hitting him for three boundaries and a six in the 18th over. The hard hitting all-round duo’s fearsome ball striking helped India post a competitive total 302-run against the hosts Australia.