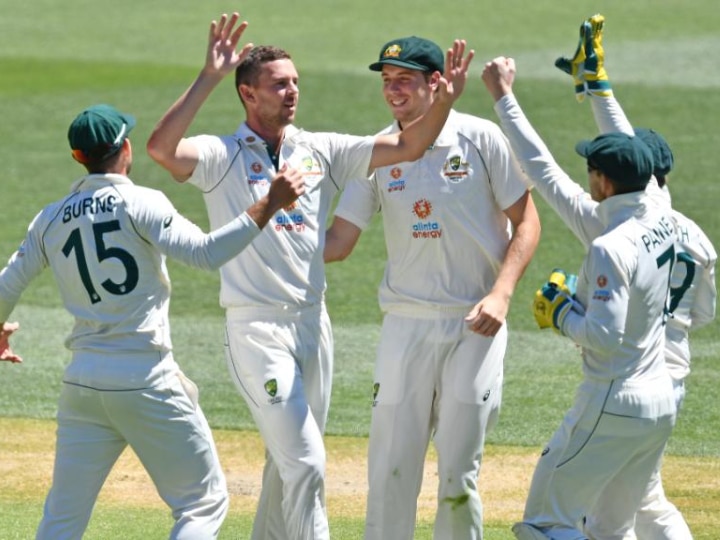 India with a lead of 62 runs and 9 wickets in hand, terribly failed to impress cricket fans on the day three of the Pink Ball test against Australia at Adelaide as Kohli & co. returned pavilion too soon this morning, naming hardly anything in their account. ALSO READ | ‘Can’t Play All Tests With Pink Ball Yet, India Not Ready’: R Ashwin After Picking Four For 55 At Adelaide

Day 3, which is often referred as the moving day in Test cricket decides what will be the outcome of the Test. After being bowled out for 191 in the first innings on Day 2, the Australian Army this morning returned strong, launching massive attack at the Indian skipper Virat Kohli and his boys.

Team India recorded their lowest ever total in Test cricket (36/9) with Mohammed Shami forced to retire hurt following a crunching blow on the arm from Pat Cummins.

Strangling the Indian players to the core, Pat Cummins and Starc literally tightened the screws not giving a single run since getting Bumrah’s wicket early in the innings.

Cummins first removed Jasprit Bumrah and then got the big wicket of Cheteshwar Pujara to push India. Hazlewood then dismissed Mayank Agarwal to reduce India to 15 for 4. Ajinkya Rahane too departed for a duck as Josh Hazlewood bowled an outswinger which was bowled fuller, which Rahane could not negotiate effectively, nicking the ball to Tim Paine.

Speaking of the captain, Kohli departed for 4 runs off 8 deliveries, after edging a slightly wide delivery from Pat Cummins to Cameron Green.