Honda shutdown is a warning of the chaos Brexit could cause 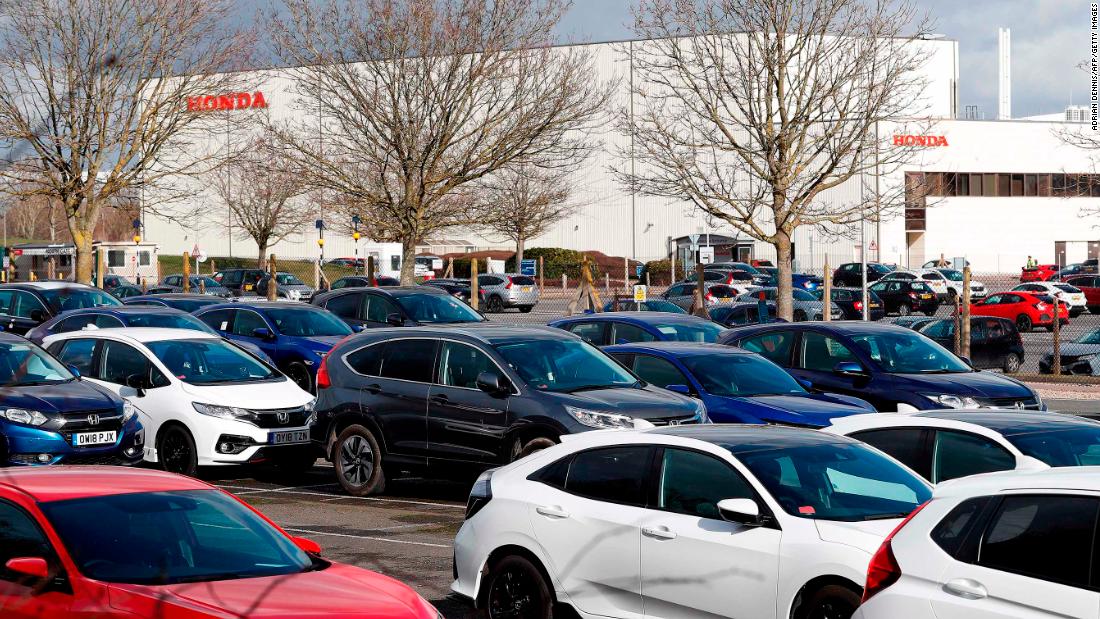 The Japanese carmaker said in a statement that production was stopped at its plant in Swindon on Wednesday due to “transport-related parts delays,” without elaborating on their cause.

“The situation is currently being monitored with a view to restart production as soon as possible,” the statement added. Honda is closing the Swindon plant, which employs about 3,000 people, next year and shifting production to Japan, North America and China.
To bypass gridlock at ports caused in part by stockpiling before Christmas and the end of free trade with the European Union on January 1, the company is drawing up emergency plans to fly parts into the United Kingdom, the Financial Times reported on Wednesday. Honda (HMC) declined to comment on the newspaper’s report.

The shutdown could be a sign of things to come. Industry groups have warned of potential border chaos and widespread supply chain disruption when the Brexit transition period ends in January, and many UK businesses are not prepared.

UK Prime Minister Boris Johnson will travel to Brussels on Wednesday in a last ditch attempt to agree to a trade deal with European Commission President Ursula von der Leyen. Doing so would spare automakers in Britain tariffs of up to 10% on their exports to the European Union.

But even with a deal, new border controls and customs checks risk holding up critical goods moving between Europe and the United Kingdom, causing major headaches for the UK auto industry. The port of Dover could be one of the worst bottlenecks, and the UK government has warned that lines 7,000 trucks long could form across the southern English county of Kent.

The Road Haulage Association told CNN Business this week that with so little clarity on new customs processes, truckers wary of getting stuck at borders may simply opt to leave goods destined for Britain in European depots, hamstringing the ability of factories to function.

UK ports are already busier than usual because of a worldwide surge in container shipping demand, which is being exacerbated by stockpiling ahead of Brexit and Christmas, the UK Major Ports Group said in a statement last month.

Goods haven’t “moved through ports quite as quickly as we would have wanted,” the trade group’s CEO Tim Morris said Wednesday. He confirmed that there have been cases in recent weeks of container ships skipping UK ports altogether due to congestion and dumping their goods in Rotterdam.

The freight is then reloaded onto other vessels and shipped to Britain. “The situation is improving,” Morris added, but said that “no sensible person” would rule out disruption at UK ports come January.

For now at least, most major UK auto supply chains appear to be functioning despite transport delays. “Even though we do see some longer transit times, there is currently no impact on our production or maintenance work,” BMW (BMWYY) spokesperson Manuel Sattig said.

The German carmaker’s Oxford and Swindon plants have already started their scheduled Christmas shutdowns to undergo planned maintenance, he added. “In general, our business is well prepared for a wide range of different scenarios that may have an impact on delivery schedules.”

Nissan (NSANF) told CNN Business on Wednesday that its Sunderland plant has not been affected by parts delays.

The industry is now bracing for January. More than 1,100 trucks bound for UK car plants cross into the United Kingdom from Europe every day, according to the Society of Motor Manufacturers and Traders (SMMT).

“Any new customs barrier in the UK-EU trading relationship would put the industry’s just-in-time operating model in jeopardy, forcing more inventory to be held on site, tying up cash in unproductive operations,” the industry group said in a report last year.

It said that delays to the arrival of components at production plants are measured in minutes and cost more than £70 million ($94 million) a day in gross value added to the industry.

Still, the biggest threat is a no-deal Brexit. Nissan, for example, has warned of possible dire consequences for its UK operations in the absence of a UK-EU trade deal.

The company’s chief operating officer, Ashwani Gupta told Reuters last month that the Sunderland plant, which employs 7,000 people, will not be sustainable if Britain does not secure a trade agreement with the European Union.

A no-deal scenario could cost British carmakers £47 billion ($62.4 billion) in lost trade over the next five years, according to SMMT.

Analysis: North Korea is doubling down on nuclear weapons even as it isolates itself to keep Covid-19 at bay