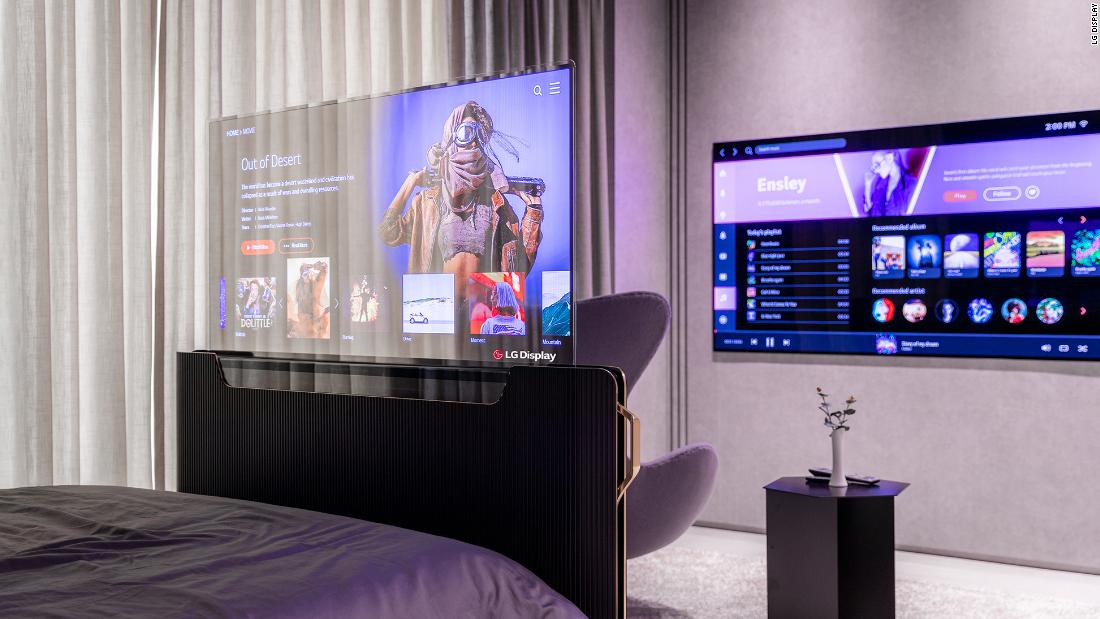 In a video shown during the all-digital CES 2021 consumer tech conference on Monday, LG (LPL) unveiled a transparent TV with a screen you can see through when on or off. The clip shows a 55-inch OLED display rising from the foot of a bed, looking like a sheet of glass before a movie appears on screen. You could still see some furniture behind it.
While 8k TVs may be the next true big bump in screen resolution, many TV manufacturers use CES as a testing ground to tease new innovations. In recent years, we’ve seen TVs that roll and bend, modular ones that are 292 inches, models that double as artwork and even chatty TVs.
Transparent TVs aren’t entirely new, but more companies are developing prototypes. In August, Xiaomi started selling a 55-inch transparent TV with a mighty high $7,200 price tag. Panasonic (PCRFF) showed off a similar model a few years ago, but only started shipping it in Japan and Asia-Oceania markets in December. LG’s model is not yet commercially available and the company did not reveal pricing.

Although transparent TVs seem like a cool-but-unnecessary technology, industry experts say they are something we could see more in public spaces soon.

“The major use case is going to be commercial for now,” said James McQuivey, an analyst at market research firm Forrester. “Environments like shopping malls, art museums and high-end restaurants will want display technology that can be unobtrusive when it’s not supposed to be the center of attention.”

Manufacturers say businesses can use transparent TVs to display information or menus in a creative way; LG even said it can act as a health partition between workers and guests. And while a sports bar may have many TVs on different channels, an upscale eatery may want displays that look more like moving art.

This may feel out of step at a time when most people are at home during the global pandemic, but display makers spend many years developing technology innovations that can often seem out of sync with market demand, McQuivey said.

“At some point in the distant future, transparent displays will be useful for a variety of applications, certainly commercial displays and perhaps even in limited cases in the home, especially as price points fall and the technology improves,” he added.

It’s not unusual for companies to release technologies without a clear market for them. Doing so is a way to gauge people’s initial response and interest, similar to the early days of OLED display technologies.

LG’s move to hide a transparent TV in a bed for its promotional video shows how the technology could find a home beyond public places, especially to save space by ascending and descending from the foot board. “TVs today are usually placed against the wall in the living room — now it can be placed like a space divider or against a large glass window, which will only look like glass when it is not in use,” said Khin Sandi Lynn, an analyst at ABI Research. “It is a cool feature for modern smart homes if the pricing and quality meets consumers’ expectations.”

Canada working with the US to close travel ‘loophole’