Football’s wacky ending to 2020: A dog pitch invasion and a new manager greeted with a clown song

football, Football's wacky ending to 2020: A dog pitch invasion and a new manager greeted with a clown song - CNN 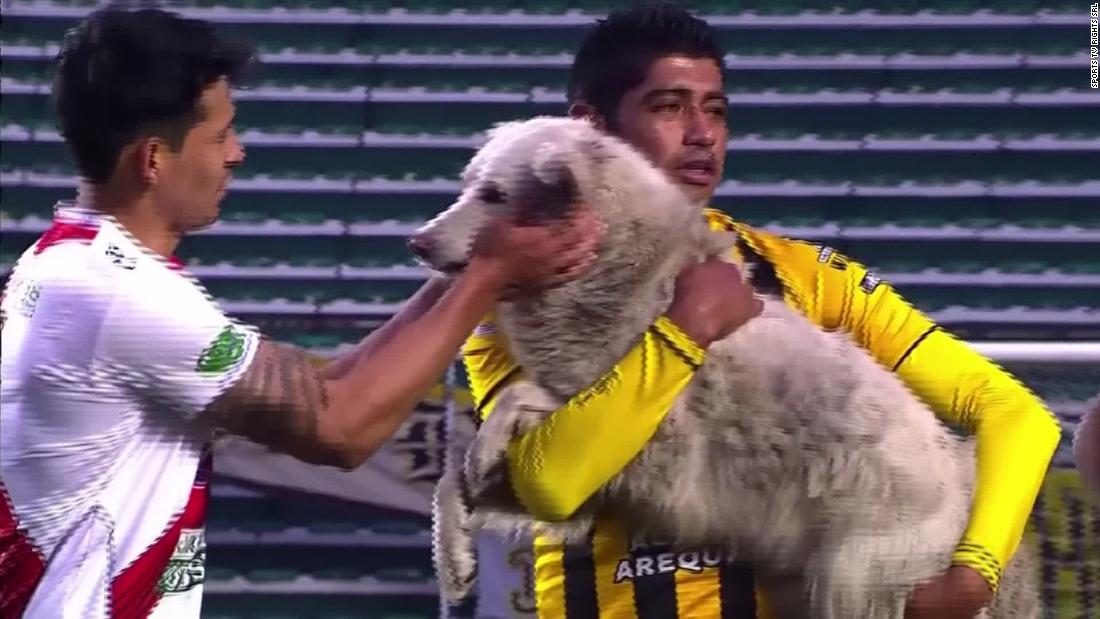 Just over a year on from a black cat stealing the show at an NFL game in New York after Halloween, a dog pretty much did the same in Bolivia over the Christmas holidays.

The furry friend, using an unused football boot as a chew toy, scampered onto the pitch during a professional soccer match in Potosi, Bolivia between The Strongest and Nacional.

While it seemed to be having a great time, jumping around and loving the attention he received from players and officials, his presence on the pitch caused the match to be paused for around three minutes of play in the game. Eventually, after regaining possession of the shoe from the dog, it was left to a player from The Strongest to carry it off the pitch.

Raúl Castro, a player from The Strongest, has told Bolivian media that he’d like to adopt the dog, who has been dubbed Cachito.

“I will adopt Cachito (little bit/morsel),” confirmed Castro. “I got in contact with the shelter where the dog is to send them some help so that they take care of him.”

“I don’t have social media and I found out through my teammates, who contacted me. I got in touch with the shelter and I said that I’d adopt the dog. Now, I sent them some help so that they take care of it. I’ll adopt it when I return to La Paz because right now I’m going to Santa Cruz.”

READ: How animals invaded the world of sport in 2020

Not the ideal welcome

A new manager at a club is intended to excite its fan base and galvanize the players towards a brighter future.

However, for former France coach Raymond Domenech, while he seems to have galvanized the fans, it doesn’t look to be in a positive way for some Nantes followers.

During his first training session after being appointed the head coach of Ligue 1 club Nantes, a band of supporters played circus music with a “ringmaster” — a dig at Domenech and club owner Waldemar Kita.

“Ladies and gentlemen, welcome to the Kita Circus! The Kita Circus brings you some new amazing new acts,” a member of the ‘Brigade Loire’ supporters’ club announced to a background of circus music.

“Raymond Domenech will explain to us his vision of football, what will make us laugh on the upcoming weekends.”

Domenech’s six-month contract at Nantes is his first job in management since France’s disastrous outing at the 2010 World Cup. He left his role as France’s head coach after finishing bottom of the group and suffering a player revolt in South Africa.

In a 2016 interview with the Guardian, Domenech quipped: “I was not France’s public enemy No1, I was No2, behind Sarkozy,” referring to the former French president.

In the interview, the now 68-year-old Domenech talked about book “Tout Seul” (“All Alone”).

“At book signings and so on people started off by saying: ‘Man, if you knew how much I hated you before reading your book. I would always reply: ‘If you read my book, then you didn’t detest me as much as all that, you just needed to know it.'”

“When I closed the door on the publisher’s office, I told myself I was closing the door on all that and moving on to something else,” added Domenech. “It was a liberating feeling. I unloaded everything, then I moved on.”

Nantes is 16th in Ligue 1, three points above the relegation zone, but hasn’t won a league game since November 8.

The Ligue 1 club did not immediately respond to CNN’s request for comment on the reaction from some fans to Domenech’s appointment.