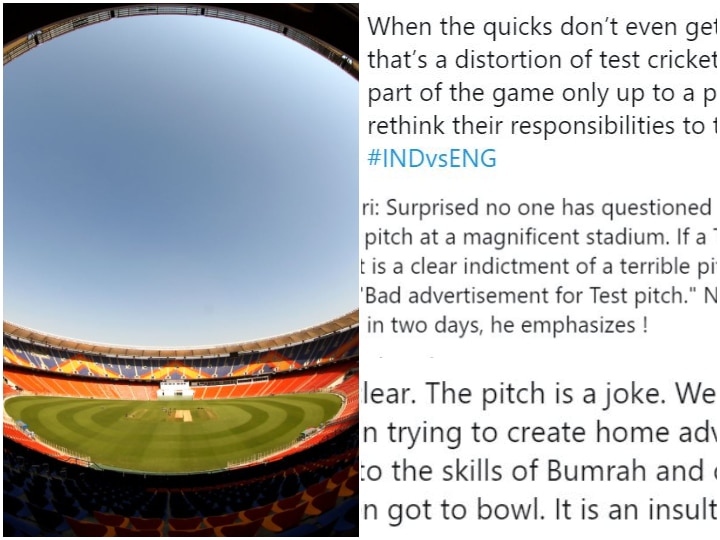 The third Test between India and England started on Wednesday at the Narendra Modi Stadium in Ahmedabad. Ahead of the series, cricket pundits had suggested that fast-bowlers would dominate in Ahmedabad under the lights as the pink ball would swing more.

However, the pitch at Motera started behaving differently from the very first day as spinners of both teams rattled the batsmen which also led some fans and experts complaining about the track.

Before India vs England Pink-Ball Test at the Narendra Modi Cricket Stadium, a total of 15 Day-Night Tests have been played so far in which spinners have picked only 115 wickets, while fast-bowlers have bagged a good number of 354 wickets.

Numbers clearly suggest that speedsters are most likely to dominate under the lights, especially with the pink ball but on Day 1 of Ind vs Eng Ahemdabad Test, Indian fast bowlers got only one wicket after bowling 11 overs, while the spinners picked nine wickets.

England batters looked confused and completely helpless against India On Day 1 of Ind vs Eng 3rd Test. Spinners Akshar Patel (6/38) and R Ashwin (3/26) picked a total of nine wickets to bundle up England for 112.

The pitch of a Day/Night Test normally has a good covering of grass on it to ensure that the ball does not lose its shine quickly and gets a good amount of swing and bounce. However, before Ind vs Eng 3rd Test match, grass was reportedly removed from the track.

This can possibly be the reason why spinners of both teams have wreaked havoc in Ahmedabad and wickets are tumbling like ninepins.

Here’s how netizens reacted to the Motera pitch on Twitter

At the time this copy was filed, England were 80/9 and led by 47 runs against India on Day 2 of Ahmedabad Test.