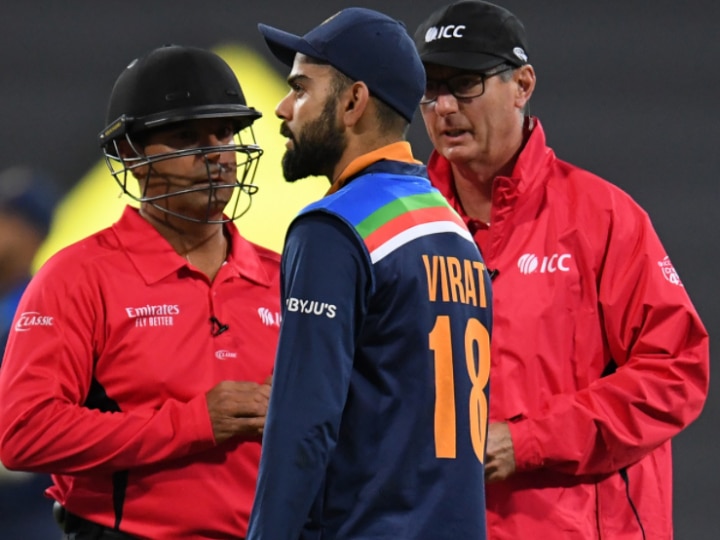 The third and final T20 match of the three-match series between India and Australia was played at the Sydney Cricket Ground (SCG). During the match, the television umpire rejected Virat Kohli’s DRS review, which he took against Aussie vice-captain Matthew Wade. The review was declared “null and void” by the third umpire, saying that the Indian captain had already seen the replay on the big screen. After this, Virat Kohli was seen arguing with the umpire, but the two on-field umpires explained the whole situation to him.

In the 11th over, Wade was batting after scoring 50 runs in 35 balls. For India, T Natarajan was bowling and his ball hit Matthew Wade’s pad. After a half-hearted appeal from team India, Wade was given not-out by the on-field umpire. Virat Kohli, who was fielding at long on during this period, was trying to talk to bowler and wicket-keeper KL Rahul, whether he should review the umpire’s decision. After a long discussion it seemed as if they had decided against it.

After this the Indian captain turned and started going back to the boundary. Virat saw the replay of that ball on the big screen and then took a review. Wade was ready for the strike, when Rahul told him that the review had been taken. Wade was heard opposing the square leg umpire on Fox Cricket’s stump mic, who was saying – he took it after watching it on the big screen.

Right decision made. Can’t have the review after the replays are on the big screen. But was it up earlier than it should have been??? Or was it played only after 15 seconds had lapsed?? #Wade #Natarajan #AusvInd

After showing a replay on the big screen, the need for review is over but it is believed that there was no 15 second countdown clock on the big screen. If Kohli had taken a review without seeing the replays, Wade would have been given out. After all the drama, Natarajan’s delivery was confirmed with ball tracking technology. India retained its review. The match also went ahead.

Australia cricket team vice captain Matthew Wade played a brilliant innings of 80 runs in 53 balls. It was also his T20 International’s highest score. On the back of Wade’s innings, Australia gave India a target of 187 runs to win.