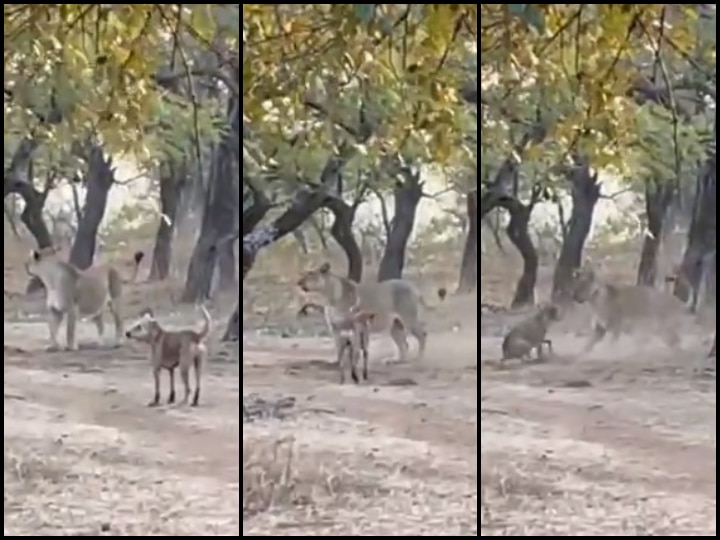 A video of a stray dog fighting a fierce battle with lioness in a forest is doing the rounds of the internet. The viral undated video was shared on Twitter by Indian Forest Service officer Parveen Kaswan. ALSO READ | As Groom Elopes From Wedding, Bride Marries A Guest Present On The Occasion

‘Need this much confidence in life. Dog vs Lion. It also highlights issue of stray dogs and wildlife interaction. Lion just used as indicative. It’s a lioness to be precise,’ IFS Parveen Kaswan said while sharing the post.

In the one and a half-minute-long clip, a lioness is seen chasing a dog which is barking furiously while running. Eventually, a fight broke out between the two animals. The dog then starts to walk away from the lioness, leaving her shocked. The dog goes back again to trouble her, continues to bark at the lioness and then runs away.

Meanwhile, another lioness is seen in the bushes who kept an eye on the entire fight. In the video, safari jeeps are also seen as they had witnessed the entire fight in front of them.

As soon as the netizens took notice of the video, they were intrigued by it and started circulating it further. The video has been viewed over 1 lakh times with 671 retweets and 3400 likes. Here’s how people reacted to it: