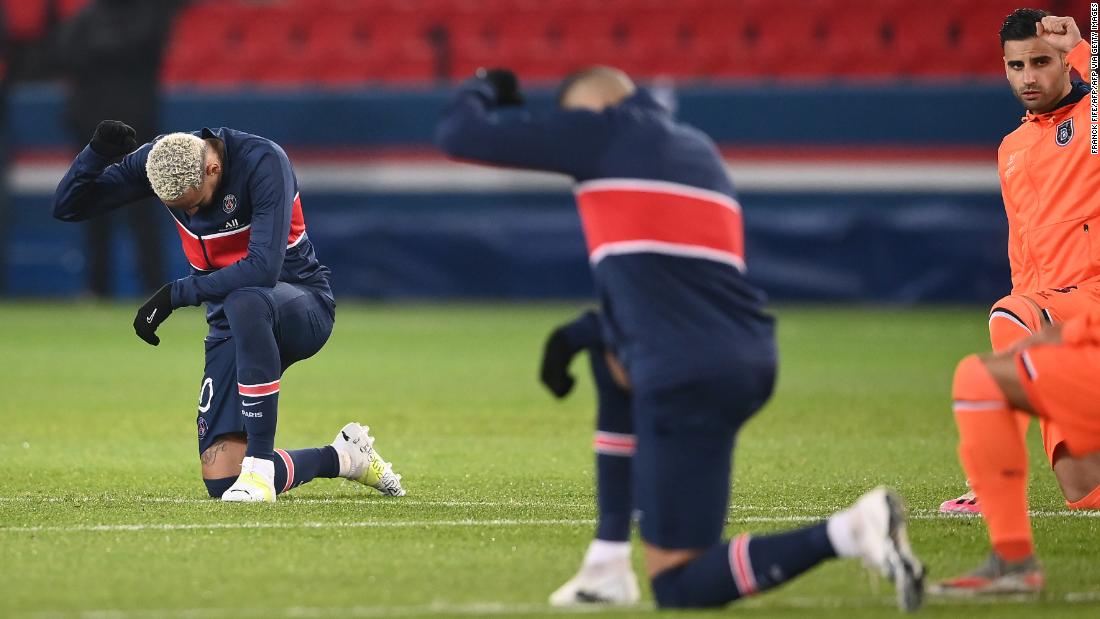 Before the game, both sets of players, as well as the new match officials, knelt together around the center circle as the Champions League anthem played, the vast majority of them also raising their fists.

Players and the coaching staff from both sides wore special t-shirts with the words “NO TO RACISM” emblazoned on the front, along with the badges of both clubs. UEFA, European football’s governing body, also ordered for there to be banners placed in the stands of the empty Parc des Princes bearing the same message.

On Tuesday, the match was halted when both teams walked off the pitch in protest after Romanian fourth official Sebastian Colţescu was accused of making an alleged racist comment towards Basaksehir assistant coach Pierre Webo, who is Cameroonian.

After being shown a red card by the match referee, Webo could be heard over the broadcast of French channel RMC Sport repeatedly asking: “Why [did] you say negro?” and pointing at Colţescu.

UEFA told CNN that Webo’s red card has been put on hold as it investigates the incident.

During the incident, Basaksehir striker Demba Ba could be heard over the BT Sport broadcast saying: “You never say ‘this White guy,’ you say ‘this guy.’ So why when mention a Black guy, you have to say ‘this Black guy’?”

The events of the past 24 hours could serve to draw a line in the sand in football’s fight against racism, marking the first time two teams have walked off the pitch and caused a match to be abandoned following an incident of alleged racism.

When the match resumed with 14 minutes on the clock, Istanbul Basaksehir were by far the superior team. Fredrik Gulbrandsen had two great opportunities to give the visiting side the lead, his first effort was blocked by PSG goalkeeper Keylor Navas and the second he sent high over the bar.

However, it only took PSG five minutes to find its feet and Kylian Mbappe really should have given his side the lead, but failed to test Basaksehir goalkeeper Mert Gunok when through on goal.

It was a sign of things to come, though, and the French sided did find the breakthrough after 21 minutes thanks to a brilliant individual effort from Neymar. The Brazilian spun brilliantly after receiving the ball from Marco Veratti and produced a delightful nutmeg on Carlos Ponck, before curling the ball past Gunok into the top corner.

PSG needed a victory to guarantee top spot in Group H ahead of RB Leipzig after the German club’s 3-2 victory over Manchester United on Tuesday and looked to have all but wrapped up the three points just minutes after scoring the first.

This time it was a blistering counter-attack that Neymar finished off, receiving a pass from Mbappe and squeezing the ball under the foot of Gunok.

Defender Mitchel Bakker thought he had added a third for PSG less than a minute later, finishing off the loose ball after Neymar had been challenged by Gunok. However, after two lengthy VAR consultations, Bakker was ruled offside and Gunok adjudged to have fouled Neymar, eventually resulting in a PSG penalty.

Up stepped Mbappe to score his first Champions League goal of the season and cement PSG’s place at the top of Group H.

Early in the second half, Neymar completed his hat-trick with another stunning goal, playing a quick one-two with Angel Di Maria before curling the ball into the far corner.

Mehmet Topal scored a scrappy consolation goal for Basaksehir, but Mbappe scored his second goal just five minutes later to wrap up a convincing 5-1 win and top arguably the hardest group in this season’s competition.