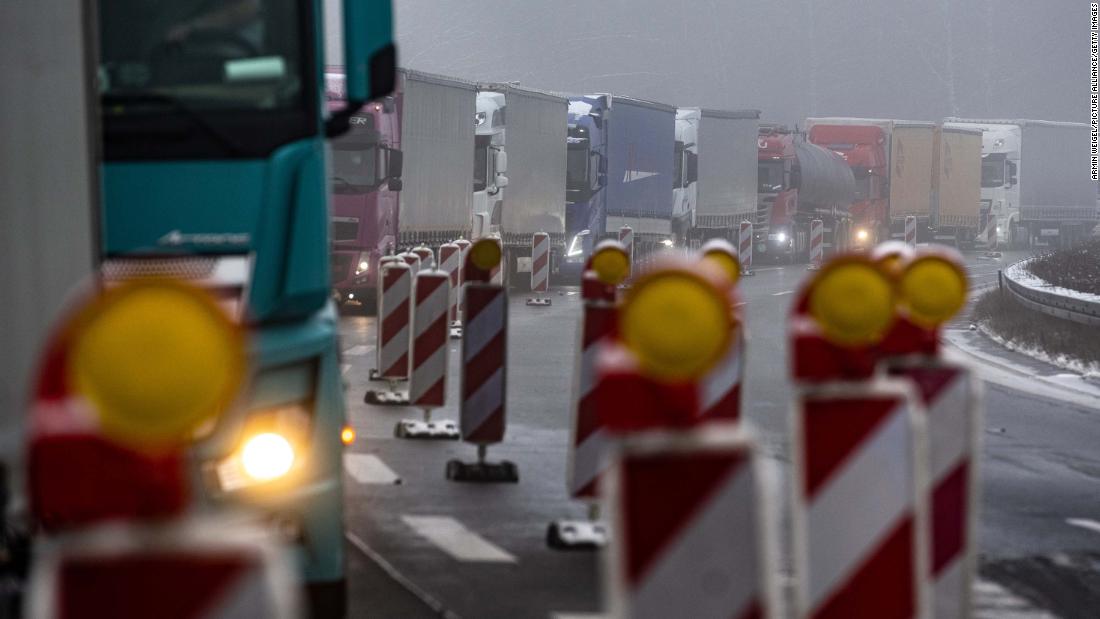 Truck drivers have experienced lengthy delays after Germany introduced stronger Covid-19 checks and immigration rules at its borders with Austria, the Czech Republic and Slovakia on Sunday in an attempt to prevent new variants of the virus entering the country. That is putting vital supply chains at risk.

“If there are lengthy traffic jams at the borders due to testing and registration requirements, the supply chain is likely to break down and production will come to a standstill at many passenger car plants in Germany shortly afterward,” said Hildegard Müller, president of the German Association of the Automotive Industry.

The border checks were imposed following the outbreak of coronavirus variants in the Czech Republic and Austria’s Tyrol region that spread more quickly than other strains. Traffic jams developed quickly, with lines of waiting vehicles stretching up to 20 kilometers (12.4 miles) in one area south of Dresden on Monday.

Europe’s biggest carmaker Volkswagen, (VLKAF) which owns the Audi, Skoda and Seat brands, said on Tuesday that there have been “no serious bottlenecks” at its factories due to trucks being stuck at the border. But it said that provisions designed to compensate for shortages would only be effective for “a certain period of time.”

“Should the border traffic situation get worse and result in even longer queues, it will no longer be possible to rule out production restrictions at Volkswagen,” a spokesperson told CNN Business. “We generally see it as the task of politicians to ensure free exchange of goods across national borders and create clear regulations in exceptional circumstances such as these.”

The company operates factories in the Czech Republic and Slovakia.

BMW (BMWYY) said its plants were supplied and running as planned. A spokesperson said the company would “monitor the situation in close coordination with our suppliers and logistics partners.” Daimler (DDAIF), the owner of Mercedes-Benz, did not immediately respond to a request for comment.

The automotive industry plays an outsized role in Germany’s export-driven economy, directly employing more than 880,000 workers in manufacturing, according to the European Automobile Manufacturers Association. German factories produced over 4.6 million cars in 2019, accounting for more than a quarter of the EU total.

The threat of parts delays from suppliers in eastern Europe is the latest in a series of logistical headaches for German carmakers, which temporarily closed some factories last year during the early months of the pandemic. More recently, they’ve been forced to contend with a global shortage of computer chips used in their vehicles.

Volkswagen said last month that the shortage of computer chips would force it to adapt production at plants in China, North America and Europe this quarter. Audi furloughed 10,000 workers.

Joachim Lang, managing director of the Federation of Germany Industries (BDI), said in an interview with German publisher Funke Mediengruppe that there could be issues across the continent.

“There is a great danger that supply chains will break down all over Europe in the next few days,” he warned.

Germany has been criticized by some of its neighbors for imposing the border checks. Slovak Foreign Minister Ivan Korčok said he had contacted his German counterpart to protest requirements for a negative coronavirus test for truck drivers.

“We are calling for a waiver of the requirement for freight drivers to present a negative test not older than 48 hours, when entering Germany. This measure will cause a huge problem, as for our drivers it is difficult to meet this requirement in practice, and it is very likely that it will trigger a chain reaction from other countries as well,” said Korčok.

Steffen Seibert, a spokesperson for the German government, said on Monday that the checks are “about temporary strong border controls and not about a border closure.”

Peter Altmaier, the country’s economy minister, held a summit with 40 representatives of German industry on Tuesday to discuss coronavirus measures. Altmaier said following the meeting that he’s in talks with his Austrian and Czech counterparts on ways to reduce waiting times at the border.