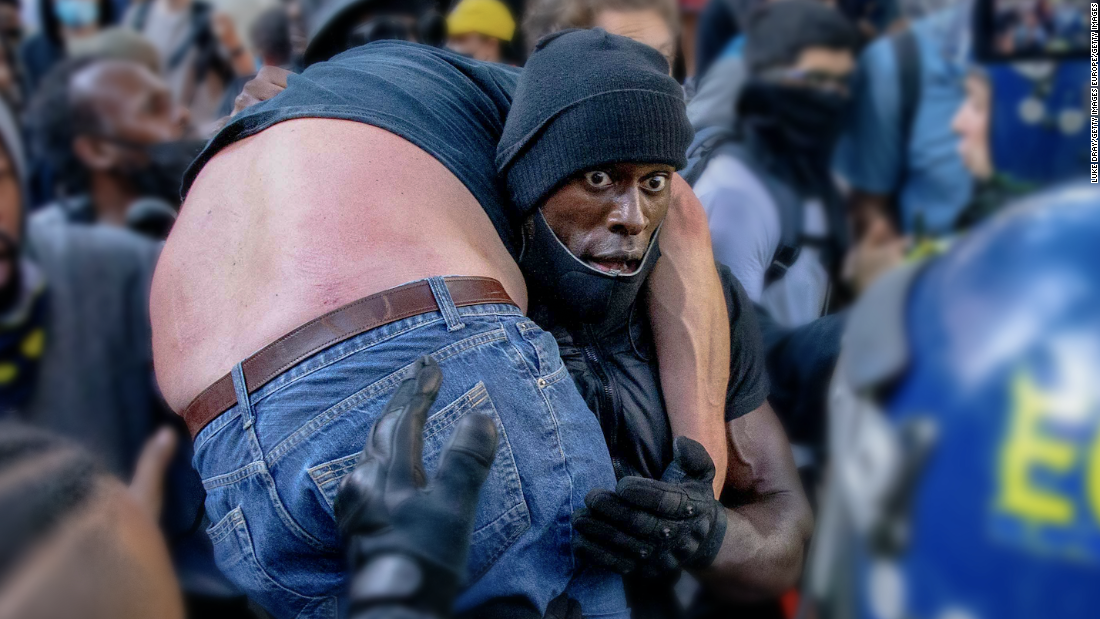 CNN Heroes: An All-Star Tribute will be available on HBO Max starting Thursday, December 17. Current HBO subscribers may have free access to HBO Max and should visit HBOMax.com for more information. Voting for this year’s Most Inspiring Moment is now closed.

They chose Patrick Hutchinson’s act of humanity at a Black Lives Matter protest in London as this year’s Most Inspiring Moment.

Hutchinson, a father and grandfather, was attending his first Black Lives Matter demonstration in June, condemning statues of people with racist ties. They were met by White protesters who were there to protect the statues.

Clashes broke out and Hutchinson spotted an attack on a man who had wandered into the crowd. He and his friends decided they could not just stand by. They formed a cordon around the man on the ground, and Hutchinson moved in, picked him up in a fireman’s carry and brought him to safety.

Patrick Hutchinson spoke to CNN after the protest and explained what was going through his mind at that moment.

“My real focus was on avoiding a catastrophe, all of a sudden the narrative changes into ‘Black Lives Matters, Youngsters Kill Protesters.’ That was the message we were trying to avoid,” he said.

The other moments viewers voted on were examples of compassion, bravery and grit that brought light and hope to one of the most challenging years of our time. These are the runners up:

Before Covid-19 hit, if you didn’t work in a hospital, you may not have given much thought to the shift change. Doctors and nurses would head home without fanfare. First responders would leave their stations after a long day.

During the pandemic, people across the United States and around the world marked the daily shift change with deafening cheers, applause, and clanging pots. It was a way to say thank you to the frontline heroes who spent their days tending to the sick, helping families say goodbye, and holding back their own pain to keep saving countless lives.

At just 6 years old, Gianna Floyd experienced a tragedy that shattered her world and woke up ours. For nearly eight minutes, handcuffed on the ground and with a knee on his neck, her father, George Floyd, pleaded for his life.

After Gianna and her mother spoke at an emotional news conference, family friend and former NBA player Stephen Jackson comforted Gianna. Sitting on his shoulders, she shared a hope for us all, saying, “Daddy changed the world.”

Round the clock for PPE

At the start of the pandemic, when masks, gloves, face shields, and protective suits to keep frontline workers safe were desperately needed, the employees at Braskem America moved in and quarantined in two of their manufacturing plants for nearly an entire month.

They ate, slept, worked and played together while producing 40 million pounds of the material needed to make lifesaving protective gear. When they needed a morale boost, their family and friends organized a parade to show their love and admiration.

Twenty-eight days later, the workers all clocked out together, having produced enough to make 1.5 billion surgical masks.

The power of music

In the early days of the pandemic, many people were finding ways to stay distanced but still connect with each other. That’s when voices around the world began lifting each other up — spreading hope and celebrating life by filling the air with music.

In Florence, people sang the Italian national anthem. In Chicago, they countered their sorrow with Bon Jovi’s “Livin’ on a Prayer.” Broadway legend Brian Stokes Mitchell found an audience as he sang “The Impossible Dream” from his balcony.

This summer, in the wake of the deaths of George Floyd, Breonna Taylor, and Ahmaud Arbery, people took to the streets to demand justice for them and to highlight centuries of systemic racism.

Millions of people across the US and around the world risked their lives in the middle of the pandemic to call for justice and equality. They inspired a peaceful force of all ages, races, religions, and creeds — sending a powerful, unifying message of equality and justice for all.