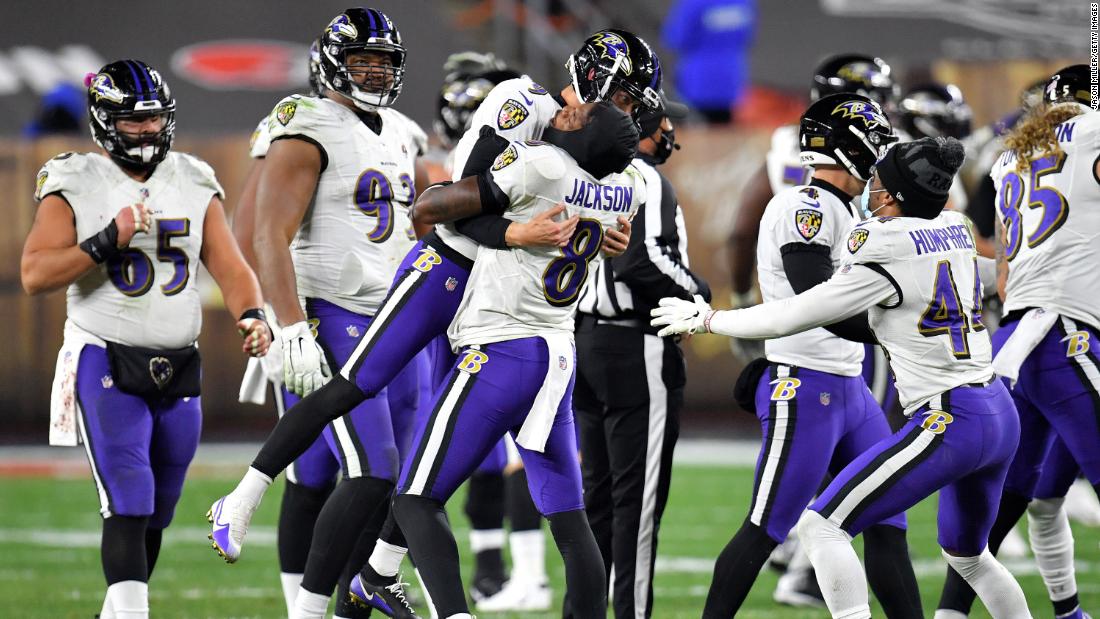 The Ravens now hold an 8-5 record — just one win fewer than the Browns in a tight AFC North division.

The Steelers are out in front with an 11-2 record but, theoretically, any one of the three teams could still clinch the division title.

The fine margins matter at the sharp end of the season, and that was no clearer than in Monday’s barnstormer of a game.

Coming up against a strong Browns team, which has secured its first winning season since 2007, an extra yard here and a dropped catch there, and the Ravens could have been on the losing side.

It was a clash of differing offensive styles. The Browns looked to throw first as quarterback Baker Mayfield attempted 47 passes, making just 28 of those attempts — nearly 10% below his average completion percentage.

In contrast, the Ravens relied on Jackson’s running ability to lead the team to victory. He rushed for 124 yards and two touchdowns — his most rushing yards in a game since October 2019, and his first game with two rushing touchdowns since November 2019.

A sloppy opening quarter saw the Browns penalized three times in the first 10 minutes of the game. Things got worse for the team as kicker Cody Parkey missed a field goal in the opening moments of the second quarter — something that would come back to bite them.

READ: NFL charging ahead with Super Bowl dreams as Covid-19 threatens to derail path to Tampa

Jackson went off with cramp in the third quarter, leaving back up Trace McSorley in charge. McSorley went down with an injury after just a handful of plays, leaving the Ravens without a quarterback. Jackson saved his team with an immediate return though, knowing they needed his help.

A Mayfield interception in the third quarter was a setback for the Browns, but he led the surge in the fourth with a 22-point comeback. Their defense kept them in the game, and with two minutes remaining, the Browns led 35-34.

One minute and two touchdowns later and the scores were level at 42-42.

Then the Ravens drove upfield, ran the clock down and with seven seconds left, Justin Tucker slotted home a field goal to take the score to 45-42 with two seconds remaining.

On the final play, the Ravens forced a meaningless safety that added an extra two-points to their tally.

Speaking after the breathless game, Ravens’ coach John Harbaugh said it would “go down in history.”

“If you wrote a movie about this, people wouldn’t believe it,” Harbaugh said. “They would say it could never happen.”

Jackson added that once he saw McSorley injured, he knew he had to step up.

“As I’m seeing [McSorley] go down, I was still stretching,” Jackson said. “I was catching an attitude, because it wasn’t going the way we wanted it to. And then I saw him go down, and I was like, ‘We’ve got to start now. We’ve just got to go out there now.’ And I started running out there.”

This nail-biting victory may be the lift the Ravens need after a disappointing 2020 season.

Last year brought a 14-2 division-winning season, a spot in the playoffs and an MVP award for Jackson in just his second year in the league.

This season has been a little tougher for the team, with more than 20 players sidelined at one point with Covid-19 — including Jackson — and a reported four strains of the virus found in the team’s facility.

In 15 games in 2019, he threw for 36 touchdowns and only six interceptions, while rushing for 1,206 yards and seven touchdowns.

This year, in his 12 games, he has thrown only 18 touchdowns with seven interceptions, rushing for 793 yards and six touchdowns.

All sport is a game of ‘ifs’ and ‘buts,’ and that was no clearer than with Parkey’s missed field goal. Maybe the game goes to overtime. Maybe the Browns win and go to 10-3, one step closer to their first playoff appearance since 2002.

As things stand, the Ravens remain in the playoff hunt in a tough AFC.