Analysis: With arrests and a security law, Hong Kong is fast running out of avenues for dissent

asia, Hong Kong is fast running out of avenues for dissent - CNN 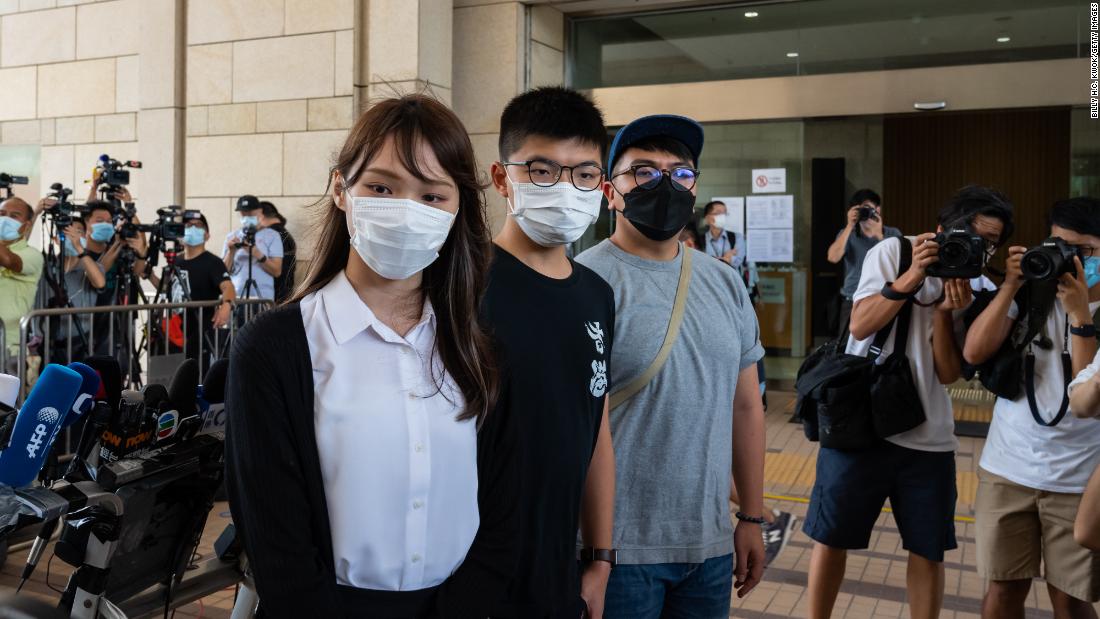 Three high-profile democracy activists were jailed Wednesday, others have already fled the city, while still more face prosecution. Their cases involve a host of charges, both serious and petty, with one of those jailed this week, Agnes Chow, convicted in large part for shouting slogans through a megaphone.
The city’s parliament no longer has any pro-democratic members, while the media and judiciary are coming under increasing pressure. Protests, once a symbol of Hong Kong, have been stifled by a new national security law and sporadically-applied coronavirus restrictions.
Invisible red lines are spreading out through a host of fields, with journalists facing arrest for accessing public records, or legislators accused of colluding with foreign powers for attending certain meetings.

All the while, as members of the opposition are picked off one-by-one, the likelihood of them being replaced by new blood is shrinking, as the spaces for cultivating new talent shrink and the cost of getting involved in politics rises ever higher.

Chow, 24, was convicted Wednesday alongside Joshua Wong and Ivan Lam. All three are former student protesters and members of the now-disbanded political party Demosisto, icons of the youth-led movement behind both the 2014 Umbrella protests and the unrest that gripped the Chinese city last year.

It was the first time Chow has been jailed, and she sobbed as the sentence was read out. Both Lam and Wong have been to prison before, and dragged before court even more often.

A day later, another iconic opposition figure, Jimmy Lai — the septuagenarian founder of pro-democracy tabloid Apple Daily — was denied bail after an initial hearing into a fraud case. He will remain behind bars until the next trial date in April.

In denying bail, the judge deemed the multimillionaire to be a flight risk, though Lai previously vowed to stay in the city and fight, despite facing growing pressure related to his activism.

In the past, yesterday’s sentences might have raised questions over the high-profile trio’s political prospects: under Hong Kong law, any prison term greater than three months results in a five-year ban on standing for office.

But this is a moot point in 2020. Wong and Chow have both already been barred from standing in previous elections, and though Chow’s ban was overturned on a technicality, it is almost certain that she would have been blocked in the future.
Hong Kong’s next parliamentary election appears likely not to feature a real opposition, matching the current situation in the legislature, where pro-democracy members resigned en masse last month, in protest at the Beijing government intervening to eject several moderate lawmakers.
In her annual policy address last week, Chief Executive Carrie Lam vowed to “restore Hong Kong’s constitutional order” and build a “harmonious and stable social environment.”
Since the protests last year — sparked by a proposed extradition law with China — Beijing has intervened heavily in Hong Kong’s supposedly autonomous affairs. A national security law, imposed by Beijing, has been used to drastically reshape politics in the city, forcing parties to disband, providing justification to bar candidates, and arrest “secessionist” figures.

The law, along with broadly applied coronavirus gathering restrictions, has effectively stifled the protest movement: Hong Kong has not seen anything like the level of demonstrations that rocked the city throughout 2019. The election bans, expulsions from the legislature, and finally the mass resignation of lawmakers have fully curtailed a body that was already struggling to provide any real check on government.

Now the authorities appear poised to take out leaders of the opposition one by one. Dozens of former lawmakers and prominent activists are facing charges related to last year’s unrest, along with hundreds of mostly young protesters, while others have the threat of the national security law hanging over them.
Outside of politics directly, the media has also felt the squeeze. The city’s leading pro-democracy newspaper, Apple Daily, was raided earlier this year, and owner Jimmy Lai has faced multiple prosecutions. A producer for public broadcaster RTHK was arrested for her work examining the police, while this week more than two-dozen reporters quit in protest at cuts made by i-Cable, a private broadcaster with a reputation for investigative reportping.
Schools, judges and civil servants have all come under increasing pressure and scrutiny, with the government planning for new loyalty oaths and an educational curriculum more in line with the “patriotic” courses taught in China.
“Nowadays there is no viable political path, no matter whether you are peaceful, violent, or even pro-establishment,” James To, one of the most senior lawmakers in the now-disbanded pro-democracy caucus, said last week. “This is because China wants to abolish ‘one country, two systems.’ They see no problem with Hong Kong becoming the same as Guangzhou.”

No breeding ground for opposition

The moves by Beijing this year threaten not only to curtail existing opposition, but prevent future figures from coming forward or gaining any support.

Agnes Chow and Joshua Wong did not come out of nowhere. Both started as teenage activists, taking part in, and later leading, street protests and mass demonstrations, before moving more directly into politics.

This helped make them international icons, but also a target for prosecution — and already last year, the movement had switched to a more fluid, leaderless system, in part to avoid having organizers easily picked off.

While some figures did emerge from the 2019 unrest, with the legislature apparently cut off as an avenue for dissent, they lose both a vital source of funding and a platform for greater influence and prominence, both in Hong Kong and abroad.

Writing this week, Raymond Li, a pro-democracy district councilor, said that what the government fears is not elected lawmakers’ powers, which are very limited, “but public recognition and their ability to shape public opinion.”

“What worries the CCP is not the veto Joshua Wong has if he is elected as a LegCo member but his ability to speak to the international community in the capacity of a LegCo member,” Li said. “The CCP worries that people give us the mandate which we will use to unite more people and strengthen the force of resistance.”

In a New York Times op-ed Wednesday, Nathan Law and Alex Chow, two former leaders of the 2014 protests who have since gone into exile, called on Washington to maintain a firm line on Hong Kong.

“The incoming Biden administration must not only remain critical of the (Chinese Communist) regime but also have the courage to foster a new China policy that prioritizes human rights over other interests,” they wrote. “Hong Kong is at the front lines of the resistance against Beijing’s authoritarianism; what happens there should matter to anyone anywhere who cares about the future of freedom.”

But Law and Chow only have such a platform because of their previous work in Hong Kong itself. Unknown protesters are unlikely to get such treatment — and even sympathetic foreign governments and politicians will be cautious of meeting with those who cannot show evidence of any real constituency.

By moving hard against them now, Beijing may hope that it not only stifles their ability to speak out, but prevents anyone coming forward to replace them.