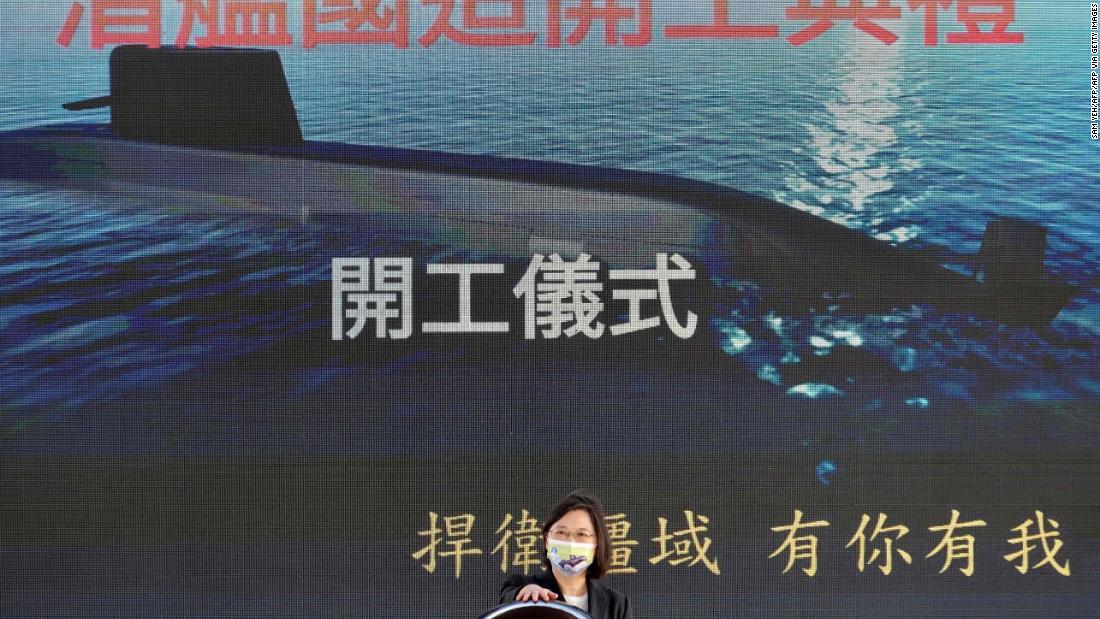 Construction on the first of eight new subs began last month at a facility in the southern port city of Kaohsiung, with the first expected to begin sea trials in 2025. At a ceremony marking the beginning of the program, Taiwanese President Tsai Ing-wen called it a “historic milestone” which “demonstrates Taiwan’s strong will to the world.”

Beijing claims full sovereignty over Taiwan, a democracy of almost 24 million people located off the southeastern coast of mainland China, despite the fact that the two sides have been governed separately for more than seven decades.

Chinese President Xi Jinping has vowed that Beijing will never allow the island to become independent and has refused to rule out the use of force if necessary. But Tsai has been defiant, saying Taiwan is at the forefront of “defending democracy from authoritarian aggression” in Asia.

But any PLA invasion flotilla would have to cross the Taiwan Strait, the relatively narrow body of water separating Taiwan from the mainland.

And that’s where the analysts say Taiwan’s planned submarines — which would replace its fleet of four subs that date back as far as World War II — could make a big difference.

Submarines remain among the world’s leading stealth weapons platforms, and can exert a heavy toll on any potential enemy fleet.

The Taiwanese submarines are expected to be of the diesel-electric variety, running on diesel engines on the surface, but using ultra-quiet electric motors powered by long-lasting lithium ion batteries when submerged, analysts said.

Choosing the diesel-electric subs over nuclear-powered ones like the one the United States Navy — and increasingly China — field was an easy choice for Taipei. Diesel-electric subs are easier and cheaper to build. And when submerged the electric motors produce less noise than nuclear reactors.

The quiet-running subs would be difficult to detect for the PLA’s anti-submarine warfare (ASW) units, analysts suggest, meaning they could lurk near the bottom of the Taiwan Strait and rise to pick off Beijing’s troop transports as they make their way toward Taiwan.

“Chinese ASW capabilities are weak and the acoustic conditions in these very shallow, noisy waters are very difficult even for advanced ASW capabilities like those deployed by Japan and the US,” said Owen Cote, associate director of the Security Studies Program at the Massachusetts Institute of Technology and an expert on submarine warfare.

Though it remains unclear precisely what technology the subs will be fitted with, earlier this year, Washington gave Taipei approval to acquire Mark 48 torpedoes.

“Every (large troop carrier) hit by a torpedo, particularly a modern one like the US Mark 48, removes a battalion of troops from the invasion force. So, no one is going to send those amphibious assault ships into the Strait until they are confident it is clear of submarines,” said Carl Schuster, a former US Navy captain who is now an analyst at Hawaii Pacific University.

Besides using US torpedoes, the subs are expected to incorporate other leading US and Japanese technologies, analysts said.

Washington has long provided arms to the territory as part of the 40-year-old Taiwan Relations Act and recently approved several major arms sales to the island valued at some $10 billion in total, including dozens of F-16 fighter jets, M1A2T Abrams tanks and portable Stinger anti-aircraft missiles.

Taiwanese officials have previously expressed hope that the US would assist in providing additional key equipment and systems required for the submarines.

This is Taiwan’s first foray into building large submarines — they are expected to have a displacement of 2,500 to 3,000 metric tons — and analysts say it remains to be seen if the island’s shipbuilding industry is up to the task.

Taiwanese shipbuilder China Shipbuilding Corporation (CSBC) was awarded the contract to develop the indigenous submarine program after Taiwan was unable to secure a foreign supplier.

“If Taiwan can build these submarines — and admittedly that is a big if given the island’s complete inexperience in manufacturing advanced submarines — these could be fairly advanced and effective,” said Timothy Heath, senior international defense researcher at the RAND Corp think tank in Washington.

Schuster said Taiwan faces a learning curve in building the subs, and it could be well into the 2030s before it could get the full fleet of eight operational.

But even if the program fails or is delayed, the analysts said Taiwan has other significant defenses it can put up against any Chinese military action.

Taiwan has a variety of anti-ship missiles, including the US-made Harpoon missile, as well as naval mines and midget submarines, said Sidharth Kaushal, research fellow for sea power at the Royal United Services Institute (RUSI) in London.

“Collectively, these assets can make a cross-strait journey very risky for PLAN (People’s Liberation Army Navy) vessels and thin out Chinese forces prior to any landing. In essence, submarines give Taiwan’s forces one more vector of attack against China’s still limited force of amphibious vessels,” Kaushal said.

For instance, the US Defense Department says China’s submarine fleet is expected to number between 65 and 70 vessels into the foreseeable future.

And China’s military construction continues at breakneck speed, continuously adding more firepower to what already is the world’s largest fleet.

Underscoring that point, just a week after Taiwan’s sub program kicked off in Kaohsiung, China was showing off what it has to counter submarines.

“PLA anti-submarine warfare aircraft conducts depth charge attack drills, seen as deterrent to Taiwan secessionists,” read a headline in the state-run Global Times. The story was topped by a picture of PLA Y-8 anti-submarine aircraft dropping a depth charge during an exercise in what the article called a “rare” report on Chinese ASW capabilities.

It also noted reports from Taiwan that Y-8s have been increasingly seen in the PLA aircraft incursions into Taiwan’s air defense identification zone.

But numbers don’t take into account politics and personalities, and both come into play regarding the new submarines, analysts said.

“Taiwan’s determination to build submarines and invest in its own defense makes it easier for US officials to politically justify helping an island under attack from China since Taiwan is doing what it can to defend itself. By contrast, a Taiwan that did nothing to improve its self-defense capabilities would make it far harder politically for US officials to justify an intervention,” Heath said.

Ultimately, it will be the US military that will have to protect Taiwan, he said.

“Absent any US intervention it is very probable that China would eventually find a way to suppress most or all of the subs,” Heath said.

“He is more of a cautious, careful and calculating leader than a bold and rash one,” said Schuster.

“Deterrence lies in convincing him the price for attacking is higher than he can afford … The submarines strengthen the possibility that will remain the case through the next 20 years,” Schuster said.