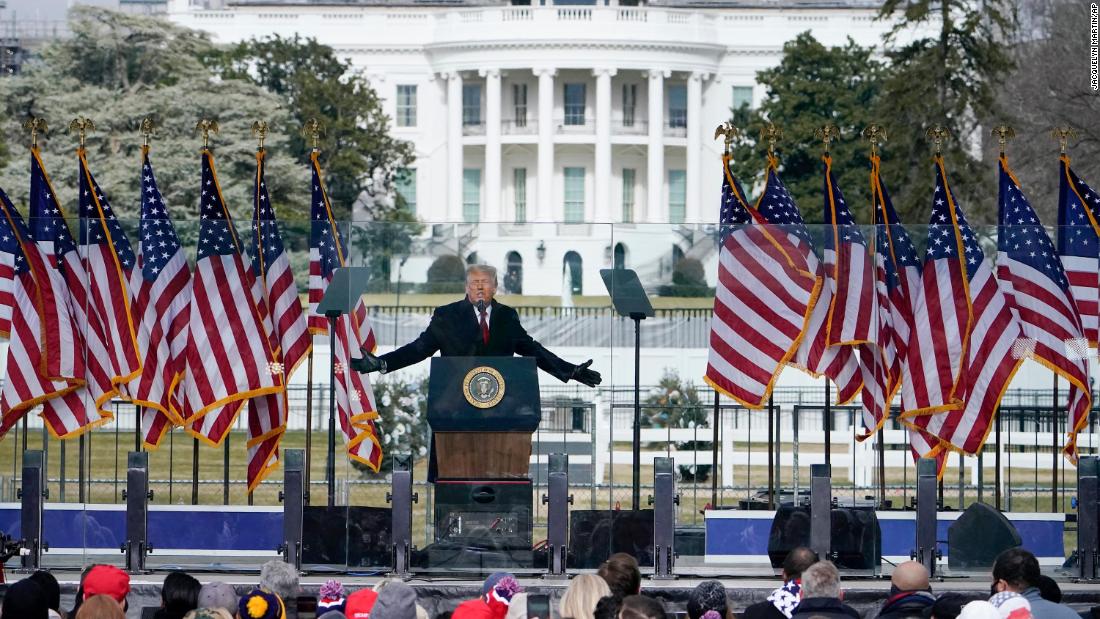 While the outcome — Trump being acquitted on the single charge of incitement of a riot — seems likely, there are still considerable stakes here. Among them: How potential offenses by future federal elected officials will be treated by Congress and Trump’s role within the GOP moving forward.

I watched the first day of proceedings, which was pretty exclusively focused on whether or not it is constitutional to impeach a former president, and jotted down some takeaways. They’re below.

* That video: If you watch only one thing that comes out of the first day of the trial, you need to make it the 13-minute video presented by the Democratic House managers at the start of their argument. It juxtaposed the proceedings in the House and Senate on January 6 with the gathering riot happening outside. It was at turns terrifying, maddening, frustrating and just plain old sad. “I don’t know whether to cry or throw up,” tweeted CNN contributor Amanda Carpenter about the video. I felt the same way. But I was also left without any doubt that what happened on January 6 could have been much, much worse if the rioters had been able to get their hands on Vice President Mike Pence or any members of Congress. And they didn’t miss doing so by much. Whether you love Donald Trump or hate him, spend 13 minutes watching the video. It provides indisputable evidence of the hate that Trump unleashed — and not only the damage it did but also the damage it might have done.
* 2024: Before either side began to make its case, the Senate held a vote on a rule package designed to govern the proceedings. That organizing resolution was the result of weeks of negotiations between leaders of both parties. It was a bipartisan effort. And yet, 11 Republican senators still voted against it. And three among those 11 stood out to me: Sens. Ted Cruz (Texas), Josh Hawley (Missouri) and Marco Rubio (Florida). What do they have in common? All three want to run for president in 2024. And all three clearly made the calculation that in order to have a chance at emerging as a favorite of the Trump coalition — assuming the 45th President doesn’t run again — they needed to not just vote to acquit Trump (as they are all expected to do) but also object to even the idea of having a trial for the former President at all. (It’s kind of like this scene from “And Justice for All.”) It’s worth noting that Nebraska Sen. Ben Sasse voted for the rules — but he is already positioned as running as a sort of anti- or post-Trump candidate.
* Rep. Joe Neguse: The Colorado congressman was a litigator in private practice prior to being elected to Congress in 2018. And it sure showed during his breakdown of the key question of the first day of the trial: Is it, in fact, unconstitutional to hold an impeachment trial for a former president? Neguse repeatedly went right to the text of our founding document to make his case that it was, in fact, entirely within the bounds of the Constitution to do so. (Even the textualists among Republican senators had to be at least a little impressed with Neguse’s close reading and expert analysis.) For Democrats looking for young stars in the making, Neguse has to be near or at the top of that list after his compelling and convincing performance on Tuesday. At 36 years old, he’s got a lot of time to decide what interests him most — rising through the ranks in the House or running statewide for governor or Senate down the line. But Neguse has the makings of a future face of the national Democratic Party — and he showed why on Tuesday.
* A rough start to the Trump defense: Trump attorney Bruce Castor kicked off the former President’s defense with what can only be described as a rambling performance that seemed to lack any sort of, well, point. To the extent I gleaned any sort of strategy within Castor’s halting and seemingly ad-libbed defense, it was this: Senators are really great and each of them care a lot about the people they represent. I think. Here’s one thing I know: There is NO way that Trump, who undoubtedly was watching — and critiquing — every moment of the trial, was pleased with Castor’s opening, um, gambit. If Trump could fire a lawyer mid-argument, you can bet he would have fired Castor. All jokes aside, the big takeaway is this: None of the top conservative lawyers wanted to risk their reputations by working for Trump. (Remember that his entire legal team for this trial quit less than two weeks ago.) Bruce Castor’s opening statement is what you get when all of the top lawyers bow out. And it’s not pretty to look at or listen to.

* Disqualify without removal?: I thought one of the most intriguing arguments put forward by the impeachment managers — Neguse, to be specific — was that there is nothing in the Constitution that suggests that the Senate couldn’t vote to ban Trump from ever running again whether or not he is convicted and, at least technically speaking, removed from office. Which is interesting! Now, to be clear: The Senate is almost certainly not going to do that. Unless Trump is voted guilty by 67 senators — and it’s very, very unlikely he would be — there is an almost 0% chance that the Senate Democratic majority will hold a vote to disqualify Trump from future office by a simple majority vote.