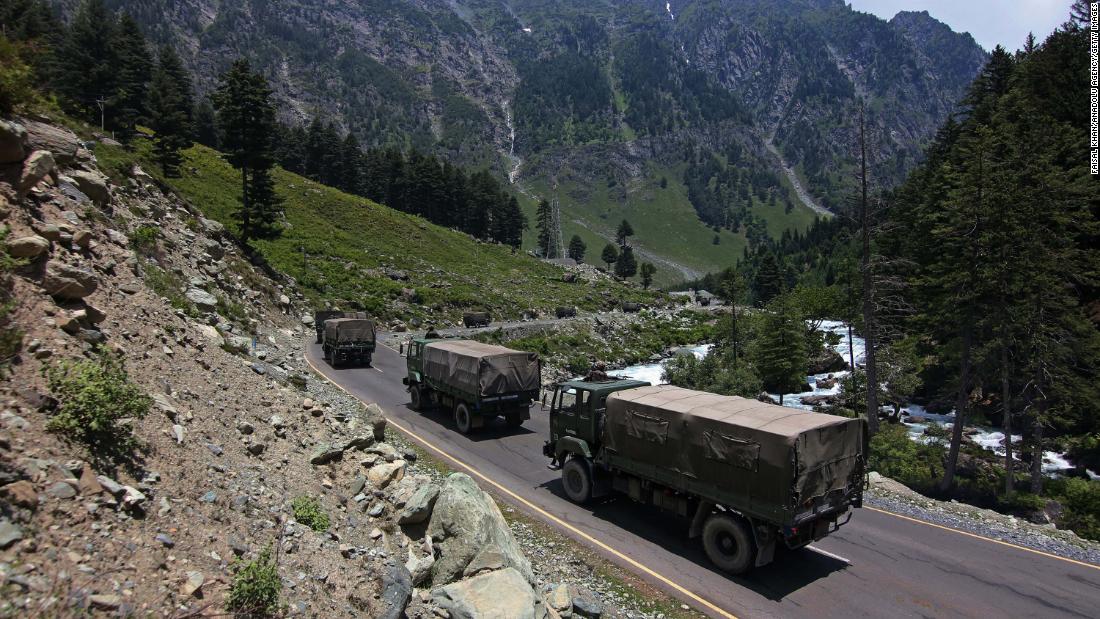 The two sides fought with fists, stones, and nailed-studded bamboo poles, in what was the deadliest border clash between the two nuclear-armed neighbors in more than 40 years. New Delhi previously said at least 20 Indian soldiers died during the brawl in the Galwan Valley area.
On Friday, China’s official army newspaper, PLA Daily, said a battalion commander, Chen Hongjun, and three soldiers — Chen Xiangrong, Xiao Siyuan and Wang Zhuoran — had died in the “fierce struggle” defending the border, and were given posthumous awards.
An award was also given to Qi Fabao, the regimental commander from the PLA Xinjiang Military Command, who was seriously injured in the clash, according to the report.

PLA Daily did not reveal the soldiers’ ranks.

According to the PLA Daily report, “foreign military” troops violated an agreement with China and crossed the border into the Chinese side to set up tents. The report also claimed that when Qi led a few PLA soldiers to negotiate, the Indian side deployed more soldiers in an attempt to force the Chinese troops to concede.
Chinese state broadcaster CCTV has also posted a video on social media of what it says was the June 2020 clash. The video purports to show Indian troops, wielding shields and long sticks, wading through thigh-deep water to confront Chinese soldiers.

CNN cannot independently verify the video. The Indian military has not responded to CNN’s request for comment.

China and India have blamed each other for the skirmish.

A source in the Indian military previously told CNN that the dispute started over a Chinese tent that was constructed the night before the clash. Indian troops, according to the source, tore it down. The next day, Chinese soldiers armed with stones and bamboo sticks with nails returned, the source said, and attacked unprepared Indian troops. CNN is unable to independently confirm this account of events.
In comments posted to an official Chinese Defense Ministry social media account Friday, spokesperson Ren Guoqiang accused India of “distorting the truth, misleading international public opinion and slandering the Chinese officers and soldiers in the frontier forces.” He said that China “kept a high degree of restraint in order to maintain ties between the two countries and militaries and worked to cool down the situation.”

Chinese state media published a report on the incident to “clarify the truth,” Ren added.

India and China share a 2,100 mile-long (3,379-kilometer) border in the Himalayas, which in places is poorly defined and hotly disputed. Both sides claim territory on either side of it.

The June 2020 clash erupted near Pangong Tso, a strategically important lake located some 14,000 feet (4,267 meters) above sea level, which spans an area stretching from the Indian territory of Ladakh to Chinese-controlled Tibet, in the greater Kashmir region where India, China and Pakistan all claim territory.

In 1962, India and China went to war over this remote, inhospitable stretch of land, eventually establishing the Line of Actual Control (LAC), the de facto border straddled by Pangong Tso. However, the two countries do not agree on the LAC’s precise location and both regularly accuse the other of overstepping it, or seeking to expand their territory. Since then, they have had a history of mostly non-lethal scuffles over the position of the border.

In September, the two countries agreed to stop sending more troops to the border, following an escalation in tensions between New Delhi and Beijing. The situation was temporarily resolved, with the two sides engaging in several rounds of talks.

But another “minor” face-off erupted between the two sides in January, according to the Indian Army, though it said that “was resolved by local commanders as per established protocols.”

On February 10, China’s Defense Ministry said the two countries had started to disengage along the south and north shores of Pangong Tso after reaching an agreement with India.

According to satellite images, China has withdrawn troops, dismantled infrastructure and vacated camps along the disputed border.

Satellite photos taken on January 30 by US-based Maxar Technologies showed a number of Chinese deployments along Pangong Tso. In new images taken on Tuesday, dozens of vehicles and building structures had been removed, leaving empty land.